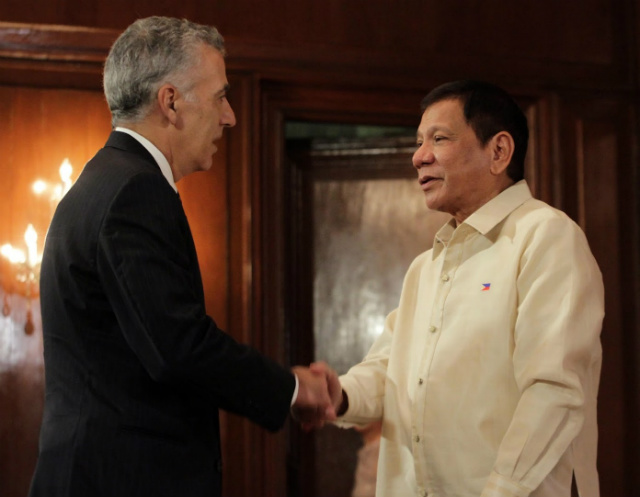 Sought for comment on Duterte’s remarks, US State Department Press Office director Elizabeth Trudeau said on Monday, August 8: “We’ve seen those inappropriate comments made about Ambassador Goldberg. He’s a multi-time ambassador, one of our most senior US diplomats.”

Trudeau continued, “We have asked the Philippines’ chargé to come into the State Department to clarify those remarks.”

Chuasoto is the chargé d’affairés of the Philippine embassy in Washington DC after former Philippine Ambassador to the US Jose Cuisia Jr left his post.

Trudeau said the US State Department called in Chuasoto on Monday.

She refused to detail the US State Department’s conversation with Chuasoto.

“I’m not going to read out that detailed conversation, but it was specifically on those remarks,” Trudeau said.

US ‘concerned’ about killings, too

This comes after Duterte on Friday, August 5, recounted his recent meeting with US Secretary of State John Kerry.

(We were talking to Kerry. He’s okay but I had an argument with their ambassador, that homosexual. Son of bitch, he really annoys me.)

Goldberg earlier criticized rape jokes after Duterte, during the campaign period, joked about the 1989 rape of an Australian missionary.

As the US State Department summoned Chuasoto, Trudeau also said the US was “concerned” about the extrajudicial killings of drug suspects in the Philippines.

Duterte was swept to power in May after pledging to end crime in the Philippines using the same “shoot-to-kill” methods critics say he employed as mayor of the southern city of Davao.

Since Duterte assumed office at the end of June, police have reported killing more than 400 drug suspects while the country’s largest broadcaster, ABS-CBN, put the death toll at 852 to include reported summary executions. – with reports from Agence France-Presse/Rappler.com