Joma thanks Duterte for prisoner release

Aug 17, 2016 10:10 AM PHT
Pia Ranada
Facebook Twitter Copy URL
Copied
Sison shrugs off his verbal tussle with Duterte, calling it a 'glitch in our communications' and reaffirms his friendship with the President 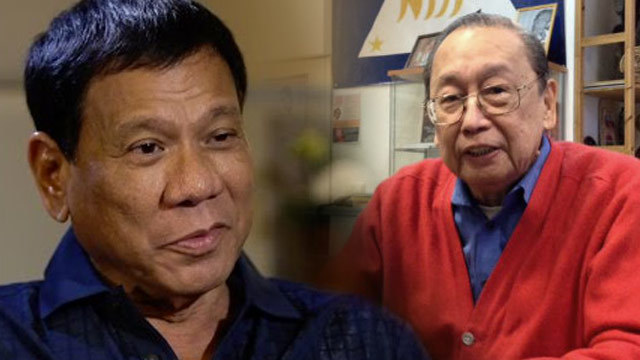 “I am grateful to President Duterte for his acts of goodwill to move forward the peace negotiations between his government and the NDFP,” said Sison in a Facebook post early morning Wednesday, August 17.

“He has made possible the release of the JASIG-protected NDFP consultants from prison and has graciously met the NDFP lawyers and consultants together with his negotiators and other officials,” he added.

For the past weeks, the Philippine government has been facilitating the temporary release of 18 political prisoners so they could join peace talks between the government and the NDFP, the negotiating arm of the Communist Party of the Philippines (CPP), in Oslo, Norway.

Among those to be released are Benito and wife Wilma Tiamzon, leaders of the CPP’s armed wing, New People’s Army (NPA),

All prisoners are expected to be released this week in time for the talks which start on August 22.

Sison also dismissed his verbal tussle with Duterte, his former student, as just a “glitch in our communications.”

In early August, Duterte called out Sison for being “arrogant“. He also criticized the CPP for overestimating its power, saying they would not have won in past elections if he had not allowed them into his local political party.

Prior to that, Sison himself said Duterte was quick to judge and lacked prudence when he hastily decided to end on July 30 a unilateral ceasefire with communist rebels he ordered on July 25. The lifting of the ceasefure was prompted by the New People’s Army attack on government militias in Davao del Norte that killed one and hurt 4 others from the government side.

Duterte set a deadline for the CCP to reciprocate with its own declaration of a ceasefire; it lapsed without any action from the CPP.

On Wednesday, Sison adopted a different tone. “President Duterte and I remain good friends. Our friendship has a strong basis in longstanding cooperation and in a common desire to serve the national and democratic rights and best interests of the Filipino people,” he said.

He also spoke of “plenty of mutual friends” who help “maintain our friendship.”

The communist leader said he and Duterte would remain in contact with each other during the talks in Oslo.

“During the formal talks in Oslo, President Duterte and I shall be in touch with each other. We intend to perform our respective parts in order to make the talks successful and beneficial to our people,” said Sison.

During the talks, both sides are expected to agree to declare unilateral ceasefires.

The rebels also want to discuss the crafting of a general amnesty proclamation by Duterte covering all 550 detained members of the CPP and NPA. – Rappler.com