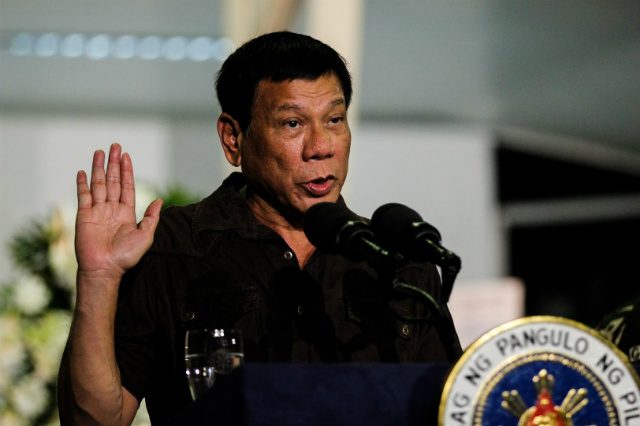 Facebook Twitter Copy URL
Copied
Philippine President Rodrigo Duterte: 'Why would the United Nations be so easy to be swayed into interfering in the affairs of this Republic?'

“Here comes the UN, easily swayed and coming on a very stupid proposition,” Duterte said in a speech at the Philippines’ police headquarters, Camp Crame.

“You know, for those who are killed by the other drug syndicates, we can only investigate, but do not attribute the acts of other criminals upon my government,” Duterte said.

Duterte on war vs drugs: UN coming up with “very stupid proposition” https://t.co/slgxrO1KRH

Duterte issued this statement after the executive director of the UN Office on Drugs and Crime (UNODC), Yury Fedotov, joined UN Secretary-General Ban Ki-moon in “condemning the apparent endorsement of extrajudicial killings” in the Philippines.

The UNODC then made a proposition “to bring drug traffickers to justice with the appropriate legal safeguards in line with international standards and norms.”

Known as “The Punisher,” Duterte has promised a bloody war against illegal drugs, as he urges policemen to shoot drug suspects who resist arrest.

The Philippine National Police said 612 drug suspects have been killed in legitimate police operations as of Monday, August 15.

In its independent tally, ABS-CBN News pegs the number of casualties at more than 830. This figure includes at least 246 killed by “unidentified assailants” and 76 “salvage victims.”

Duterte: UN ‘easy to be swayed’

On the recent killings, Duterte said on Wednesday: “It’s very easy to complain. We in government, and I myself who ordered the campaign against drugs, claim full and sole responsibility for it.”

“And for those who are killed in a police operation and a firefight, we are willing to submit ourselves for an investigation before anybody,” he said.

Duterte continued, “I would like also to just say, why would the United Nations be so easy to be swayed into interfering in the affairs of this Republic?”

“There are just about 1,000,” he said, apparently referring to the number of people killed in the war on drugs.

Duterte on war vs drugs: Why is the UN easily swayed? https://t.co/3JAd5fiXEI

He said that “there are a lot of people, innocent women, children, young women, young men, old men, old women, being killed elsewhere in this world” without the UN saying “the slightest” words.

Duterte said: “Take for example in the Middle East. I have yet to complain, the United Nations complaining publicly. Even not criticizing the countries who are into it and bombing villages and communities, killing everybody there, including the goats and the cows and the dogs.”

Even before he took office on June 30, Duterte already cursed the UN on June 2 for failing to solve the conflict in the Middle East and not helping the “black people” in Africa.

Recently, he called US Ambassador to the Philippines Philip Goldberg “gay” and a “son of a bitch” after the diplomat criticized his rape joke during the campaign period.

This US denounced Duterte’s comments about Goldberg as “inappropriate and unacceptable.” The diplomat in charge of the Philippine embassy in Washington DC, Patrick Chuasoto, was also summoned to the US State Department to explain why Duterte said this. – Rappler.com