Aug 20, 2016 10:09 AM PHT
Rappler.com
Facebook Twitter Copy URL
Copied
'We call on all fellow Negrenses to stand up and link arms once again. Let us oppose this shameful dishonor to Filipino dignity,' say Negros organizations and concerned citizens 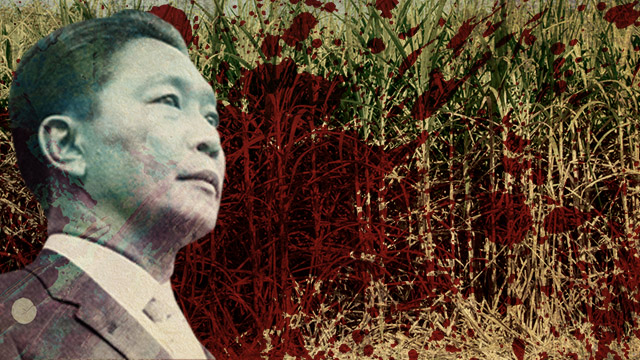 MANILA, Philippines – Concerned Negrenses recalled the hardships suffered by Negros Occidental under the strongman rule of the late Ferdinand Marcos, as they opposed his burial at the Libingan ng mga Bayani.

In a signed statement, members of Negros Occidental-based civil society organizations urged President Rodrigo Duterte to rescind his order for a hero’s burial for Marcos, saying this would not promote national healing but would only create deeper fissures among Filipinos.

“We call on all fellow Negrenses to stand up and link arms once again. Let us oppose this shameful dishonor to Filipino dignity. We call on President Duterte to rescind his earlier decision to bury the dictator Marcos at the Libingan ng mga Bayani,” the group said.

“It will essentially extinguish the very cause that our people fought for at EDSA in 1986 and aggravate the political division among Filipinos,” the group added.

Closer to home, they said: “In Negros alone, thousands suffered from unjust incarceration and merciless tortures by Marcos soldiers and paramilitary. Priests, nuns, farm workers, church workers, and anyone who stood for human rights were labeled as ‘communists’ and abducted, tortured, and/or killed in the most brutal manner.”

“We continue to feel the anguish of the families and survivors of the massacres in Escalante City, at Hiyang-hiyang in Cadiz, and of the Langoni 9 in Inayawan, Cauayan,” the group added.  (READ: Worse than death: Torture methods during martial law)

In 1985, paramilitary forces gunned down civilians holding a rally in Escalante to mark the 13th anniversary of the declaration of Martial Law. A year earlier, 9 young boys from Sitio Langoni in Inayawan village had just cast their votes and were on their way to a basketball match when they were abducted and killed by the military.

The group also recalled how “Marcos and his cronies plundered the sugar industry” through the Philippine Sugar Commission (Philsucom) and its trading subsidiary, the National Sugar Trading Corporation (Nasutra).

Marcos created Philsucom in 1976 to address the problem of declining sugar prices, and empowered it to be the sole buyer and seller of sugar in the country. It also set prices paid to planters and millers, giving the government complete monopoly over the industry.

Instead of helping the sugar industry, the Philsucom-Nasutra pushed sugar planters deep into debt. By 1984, over 190,000 workers lost their jobs and about 1 million people experienced famine in Negros Occidental, the group said, citing a report from the Los Angeles Times.

The suffering hasn’t stopped, they said, as Filipinos continue to pay for the  debt incurred by the Marcos regime to this day.

A hero’s burial for Marcos “insults the victims of human rights violations by the Marcos dictatorship and is an affront to us ordinary Filipinos who have to continue to pay the Marcos foreign debt,” the group said.  (READ: #NeverAgain: Martial Law stories young people need to hear)

Three petitions against a hero’s burial for Marcos have been filed before the Supreme Court, two of which have been consolidated by the High Tribunal and would begin oral arguments on August 24. – Rappler.com