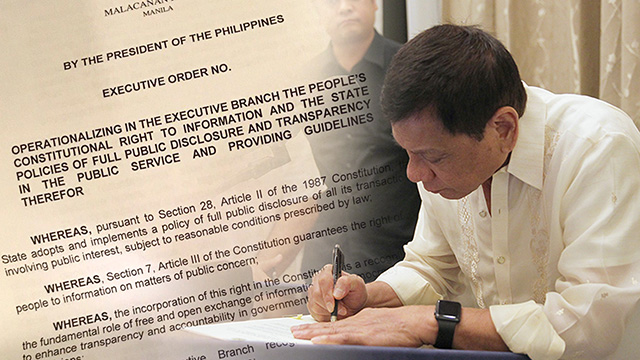 MANILA, Philippines – Individuals seeking information from the government may need to review 166 exceptions listed in the August 22 draft of the Freedom of Information (FOI) People’s Manual.

The list of exceptions, taking almost 11 pages of the draft manual, was penned upon the recommendation of the Department of Justice (DOJ) and the Office of the Solicitor General (OSG).

It comes after the executive order (EO) signed by President Rodrigo Duterte on July 23, mandating full public disclosure of all offices under the executive branch “including, but not limited to, the national government and all its offices, departments, bureaus, offices and instrumentalities including government-owned and -controlled corporations, state universities and colleges.”

No person shall be denied the chance to request information, directed the EO.

However, it is a different matter if the information sought “falls under any of the exceptions enshrined in the Constitution, existing law, or jurisprudence.”

Also exempt from the FOI are “records of minutes and advice given and opinion expressed during decision-making or policy formulation” as it may impair the President’s deliberative process.

Law enforcement matters including those related to the “apprehension, the prosecution, and the detention of criminals,” investigations conducted by public authorities, and the identity of informers, among others, are also listed in the exceptions.

The manual stated that free public access to these information may “seriously jeopardize” law enforcement.

Personal information such as school and medical records are included in the list of exceptions in the FOI as disclosing these “would constitute an unwarranted invasion” of personal privacy.

Government officials’ Statements of Assets, Liabilities, and Net Worth (SALNs) may only be given for public dissemination through, for example, media organizations.

SALNs will not be disclosed, according to the manual, “if the purpose is contrary to morals or public policy or if they are intended for any commercial purpose.”

The list of exceptions also states that “government officials cannot be compelled to prepare lists and detailed reports on how congressional funds were disbursed.”

Information gathered by government agencies on businesses in the country such as trade secrets, confidential financial data, as well as books and records of private corporations are also included in the list of exceptions.

Documents submitted through the Government Electronic Procurement System (GEPS) are also exempt from the FOI.

Meanwhile, anti-money laundering concerns, “covered or suspicious transaction reports, or any other information in relation thereto” are also in the list together with secrecy of bank deposits.

With 166 items not subject to the FOI, won’t the measure be watered down?

According to Palace Communications Secretary Martin Andanar, the list is not yet final.