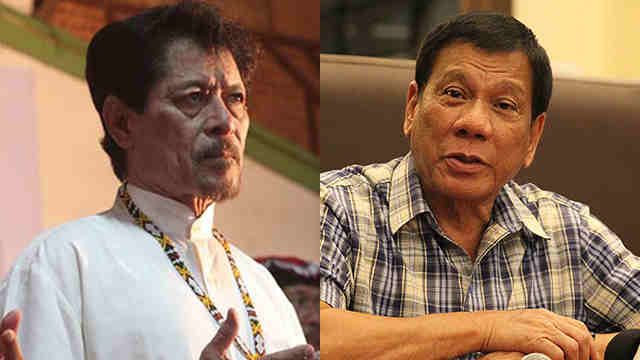 Facebook Twitter Copy URL
Copied
To make the meeting possible, President Duterte says he will order the police and military not to implement the warrant of arrest against the MNLF leader

Duterte said on Wednesday, August 31, that Misuari suggested the venue of Kuala Lumpur, Malaysia, during a  phone conversation on Tuesday night, August 30.

(Nur and I talked. He wants to meet in Kuala Lumpur…He said, after two days let’s sign then we end the fighting.)

The President did not elaborate on what was to be signed with Misuari. The Philippine government had signed a peace agreement with the MNLF in 1996.

Duterte said he wants the meeting to take place to increase chances of stopping violence in parts of Mindanao.

The latest casualties on the government side were the 15 soldiers killed during operations against the Abu Sayyaf Group in Patikul, Sulu, on Monday, August 29.

To make the meeting possible, Duterte will order the police and military not to implement the warrant of arrest for Misuari.

“Ako man ang hepe ng pulis at military, sabihin ko, huwag galawin (I am the commander-in-chief of the police. I’ll say, don’t touch him). There is a warrant of arrest but don’t implement it against him,” he said.

Misuari has a standing arrest warrant for rebellion and violation of international humanitarian law in relation to the 2013 Zamboanga siege. The siege led to the deaths of over 200 people, and the displacement of thousands of others.

On Wednesday, Duterte said he told Misuari not to fear arrest.

“I told him, Nur, I have no intention of detaining you or placing you in custody of government,” said Duterte.

The President had wanted to meet with the Moro separatist leader on August 12 when he visited a military camp in Jolo, Sulu, but Misuari was a no-show.

Duterte had then said he expected to meet Misuari in 2017. – Rappler.com