Sep 2, 2016 8:54 AM PHT
Agence France-Presse
Facebook Twitter Copy URL
Copied
UN spokesman Stephane Dujarric says they tried to set a time for a meeting on the sidelines of the ASEAN forum in Laos next week, but that 'no time could be agreed upon' 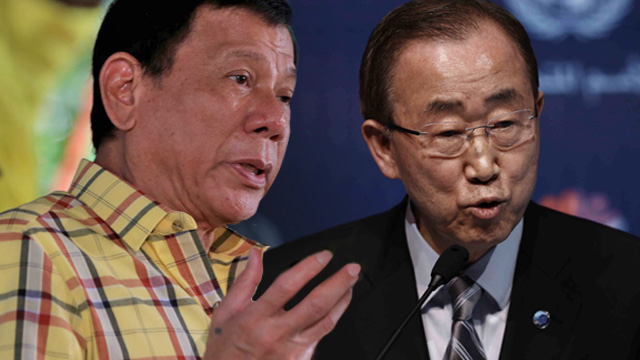 UN spokesman Stephane Dujarric said they tried to set a time for a meeting on the sidelines of the ASEAN forum in Laos next week, but that “no time could be agreed upon.”

A foreign affairs spokesman in Manila said that 11 heads of state had requested meetings with Duterte during the Association of Southeast Asian Nations (ASEAN) meeting, and that he had said yes to 9 of them.

“Please understand that he cannot accept them all and no one should impute any negatives on those he could not accommodate,” said Charles Jose in Manila.

Duterte’s spokesman Ernesto Abella said the September 6-8 ASEAN meeting in Vientiane was “extraordinarily full” and that “a number of possible meetups have to be presently foregone.”

Duterte has launched several tirades against the world body after a UN special rapporteur criticized his crackdown on crime, even threatening to pull out of the United Nations, a threat he later withdrew.

“Maybe we’ll just have to decide to separate from the United Nations. If you are that disrespectful, son of a whore, then I will just leave you,” Duterte said in a press conference last month.

He later said the threat was just a “joke.”

Over 2,000 people have been killed since Duterte was sworn into office on June 30 and immediately launched his war on crime, according to the national police chief.

Duterte has insisted most of the 929 people confirmed killed by police were drug suspects who resisted arrest, while the others died due to gang members waging warfare against each other.

However rights groups, some lawmakers and others have said security forces are engaging in unprecedented extrajudicial killings. – Rappler.com