Sep 3, 2016 6:21 AM PHT
Rappler.com
Facebook Twitter Copy URL
Copied
(5th UPDATE) The declaration is to ensure 'coordinated efforts' between the police and the military in the government's fight against terrorism and illegal drugs, the President says 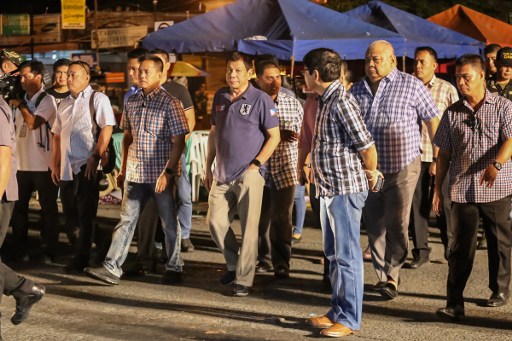 DAVAO CITY, Philippines (5th UPDATE) – President Rodrigo Duterte on Saturday, September 3, declared a “state of lawlessness” in the country following a deadly blast here that killed at least 14 people and wounded more than 60.

“I am declaring now a state of lawlessness. It is not martial law. It has nothing to do with the suspension of the writ of habeas corpus. We go about but I said there will be checkpoints,” he told reporters early morning on Saturday, September 3, in Davao City.

The declaration is to ensure “coordinated efforts” between the police and the military in the government’s fight against terrorism and illegal drugs, Duterte said. (READ: Davao bombing: Man leaves backpack after massage)

‪The 1987 Constitution allows the President to call on the armed forces to “prevent or suppress lawless violence.”

Duterte said there would be greater presence of soldiers all over the country and more checkpoints. He, however, said he would not be imposing any nationwide curfew yet.

“These are extraordinary times….There is a crisis in this country involving drugs, extrajudicial killings, and there seems to be environment of lawlessness, lawless violence,” the President said. (READ: What’s a ‘state of lawlessness’?)

The Armed Forces of the Philippines said they will implement the President’s order immediately. “The AFP is prepared to undertake any task that will be issued in regard to the declaration of state of lawlessness by the commander in chief,” the military said in a statement Saturday morning.

It added that reports on the explosion remained “sketchy.”

“We call for sobriety and for the people to stay calm and refrain from any speculations so as not to exacerbate the situation.”

The President initially issued a nationwide declaration, but his special assistant, Bong Go, clarified hours later that this was limited only to Mindanao. (READ: What’s a ‘state of lawlessness’?)

Less than an hour later, Go reverted to Duterte’s first announcement – that the declaration covers the “whole Philippines.”

Communications Undersecretary for Media Relations Rachel “Queenie” Rodulfo said, “the Office of the Executive  Secretary will publish a definitive statement later today” regarding the declaration.

But even with the latest clarification, Palace Communications Secretary Martin Andanar said in an interview with dzBB, ‪”Hindi pa ho maliwanag kung sakop po ang buong bansa, sigurado po, sakop po nito ang buong Mindanao‬ (It’s not yet clear if this covers the entire country but certainly, it covers the whole of Mindanao).”

Presidential Spokesperson Ernesto Abella later told reporters, “Due to heightened security issues, the coverage of the state of lawlessness will include both Mindanao and the rest of the nation.”

The Philippine National Police (PNP) said in a statement on Saturday that it is conducting a “thorough investigation on the incident to determine the cause of explosion or those responsible” and that the entire police force is on “full alert status” starting Saturday.

“We assure the public that the PNP is handling the situation carefully,” the PNP said.

(We are encouraging the public not to be intimidated these people because their final objective is really to terrorize the people. So if we get intimidated by them, they’ve won….Let us live normal lives, just be alert and cautious all the time but don’t be intimidated.)

The Abu Sayyaf has claimed responsibility for the attack and warned that it was only the beginning.

Duterte, a former Davao mayor, also ordered a lockdown in the city, which allows soldiers and cops to search everyone as well as vehicles and houses.

The President visited the blast site at 5:10 am Saturday after a conference with the police and military here. He did not disclose their initial findings from the probe.

But he claimed he and some law enforcement agencies were “forewarned” about the explosion. 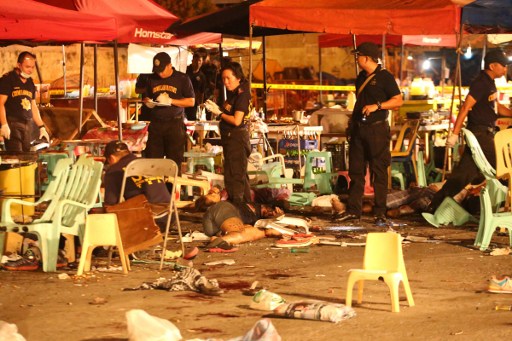 “We were forewarned, we were ready, all the officials are here, even [Customs Chief Nicanor] Faeldon, all the intelligence heads nandito (are here),” said Duterte.

Though he did not say outright that the explosion was an act of terrorism, he seemed to link the incident to recent incidents involving terrorists.

“There was this warning. There was another one, the Maute incident. There has been a lot of violence committed lately by the terrrorists,” he said.

Duterte also said he recently warned the public about retribution from the Abu Sayyaf after he ordered the deployment of more troops to Jolo, Sulu, one of the group’s stronghold.

“I remember warning everybody there’s going to be a reprisal,” he said.

But law enforcement agencies are yet to confirm if the explosion at Roxas Night Market was indeed caused by a bomb.

The President said he is pushing through with his trips to Laos and Indonesia next week but has postponed his visit to Brunei in view of the incident. – With reports Pia Ranada, Camille Elemia, and Bea Cupin/Rappler.com