Sep 6, 2016 11:48 AM PHT
Pia Ranada
Facebook Twitter Copy URL
Copied
(2ND UPDATE) In issuing Proclamation 55, Malacañang cites 'credible threats of further terror attacks and other similar acts of violence by lawless elements in other parts of the country, including the metropolitan areas' 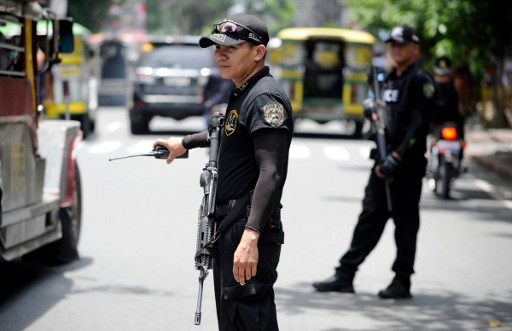 MANILA, Philippines (2nd UPDATE) – Malacañang on Tuesday, September 6, released the proclamation on a state of national emergency on account of lawless violence.

Proclamation No. 55 – which President Rodrigo Duterte signed on September 4 –  is entitled, “Declaring a state of national emergency on account of lawless violence in Mindanao.”

Under Proclamation 55, Duterte commands “the Armed Forces of the Philippines and the Philippine National Police to undertake such measures as may be permitted by the Constitution and existing laws to suppress any and all forms of lawless violence in Mindanao and to prevent such lawless violence from spreading and escalating elsewhere in the Philippines with due regard to the fundamental civil and political rights of our citizens.”

Proclamation 55 states that Duterte’s power to declare a state of national emergency stems from Section 18, Article VII of the 1987 Constitution.

“The President, as the Commander-in-Chief of all armed forces of the Philippines, may call out such armed forces whenever it becomes necessary to prevent or suppress lawless violence,” the constitutional provision reads.

Proclamation 55 describes recent terrorist acts like the Maute prison escape of terrorists, beheadings by the Abu Sayyaf of its hostages, the deaths of 15 soldiers in an Abu Sayyaf encounter as basis for the declaration, aside from the Davao City blast on September 2 that killed 14 people and injured over 60 others.

These acts “exhibit the audacity and the propensity of these armed lawless groups to defy the rule of law, sow anarchy and sabotage the government’s economic development and peace efforts,” Proclamation 55 said.

It also said that “based on government intelligence reports, there exist credible threats of further terror attacks and other similar acts of violence by lawless elements in other parts of the country, including the metropolitan areas.”

Proclamation 55 will remain in force and effect “until lifted or withdrawn by the President.”

President Gloria Macapagal-Arroyo was the last Chief Executive to declare a state of emergency, following a foiled coup attempt in 2006. It lasted for about a week.

In an interview with dzMM early Tuesday, Executive Secretary Salvador Medialdea said the President issued Proclamation 55 “to see to it na ma-address na itong mga problemang ito (that these problems are addressed) in a very civilized manner.”

(You know, this recent bombing in Davao, our intelligence report is that…this may happen in other parts of the Philippines. So we don’t want to have added numbers to the 16 deaths and 67 wounded the other day.)

He assured that the proclamation would have no impact in civil rights.

The only difference, the Palace official said, is the “visibility” of soldiers in more areas, who would “just give assistance” to the police.

“And we will issue guidelines within the day with the implementation of this Proclamation,” he said.

In a statement, Vice President Leni Robredo said: “We respect the decision of the President to exercise his constitutional power to call out the Armed Forces of the Philippines to assist in suppressing lawless violence. And we appreciate that the Proclamation makes clear that this does not suspend any part of the Constitution or impair any of our fundamental rights.”

“We reiterate our call that we bring to justice those responsible for the violence in Davao and at the same time, our bill of rights is followed and treated with utmost respect,” Robredo added.

Senate Minority Leader Ralph Recto said while he supports the President’s declaration of a state of lawlessness, he has “reservations on one that is indefinite.”

“By stating when the emergency will end, pressure is exerted on the government to restore normalcy as soon as possible. In case, however, the objectives are not met, Malacañang can just extend the period of emergency. A renewable declaration is better than one that is open-ended,” Recto said.

Below is Proclamation No. 55: