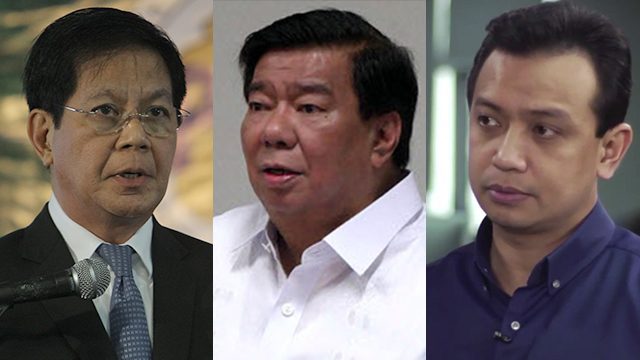 Facebook Twitter Copy URL
Copied
(UPDATED) 'We must remember that our foreign policy is shaped in accordance with our national interest. Unfriendly rhetoric and undiplomatic statements will not bring us anywhere,' says Senate President Pro Tempore Franklin Drilon

MANILA, Philippines (UPDATED) – Several senators on Tuesday, September 6, reminded President Rodrigo Duterte of his role in shaping foreign policy, as the Philippine leader marked his international debut at a meeting of Southeast Asian leaders and their dialogue partners in Vientiane, Laos.

The reminder was prompted by Duterte’s tirade against US President Barack Obama over the latter’s plan to bring up the human rights situation in the Philippines at their supposed bilateral meeting.

Washington canceled the leaders’ scheduled meeting at the sidelines of the Association of Southeast Asian Nations (ASEAN) Summit and related Summits  in Laos, but the meeting was reset for a future date after Duterte expressed regret over his “strong statements” against Obama.

“Talk about starting off on the wrong foot….It is unfortunate that such meeting did not push through because of unnecessary rhetoric over human rights issues,” Senate President Pro Tempore Franklin Drilon said in a statement on Tuesday, prior to Duterte’s expression of regret over the incident.

“We must remember that our foreign policy is shaped in accordance with our national interest. Unfriendly rhetoric and undiplomatic statements will not bring us anywhere. We should maintain our relations with the US as a strong treaty ally that have been built over decades,” Drilon added.

He said a meeting between the two leaders later date, “would have been an opportunity for the two heads of states to know each other on a personal level.”

“I am hopeful that the long-standing relationship between the two nations will remain to endure and that both leaders will have other opportunities of meeting again under a more comfortable and friendly circumstances,” Drilon said.

Senator Antonio Trillanes IV expressed concern about the possible repercussions of Duterte’s slur against the US leader on the Philippines’ bilateral ties with its oldest and most powerful ally.

“President Duterte’s vulgar language directed against President Obama is wrong on so many levels and will definitely have detrimental effects on our diplomatic relationship and alliance with the US,” he said.

“You don’t just slap the face of the most powerful country in the world and expect to get away with it. It was uncalled for and now our country’s security sector would be weakened because of it,” Trillanes added.

No ‘drastic’ change in PH-US ties

Senator Panfilo Lacson said that the incident would have no “drastic” impact on Philippine ties with the US.

“Any statement spoken by a country’s leader is always construed as a policy statement. Having said that, I don’t see any drastic change in the long-standing friendly relations between the Philippines and the United States. We are one of the United States’ strongest allies in the Asia-Pacific region, and it will stay that way,” Lacson said.

“Presidents come after elections and go after their terms end, while alliances between countries remain strong, especially between the United States and the Philippines,” he added.

Lacson expressed hope, however, that Duterte would come to “realize” his role in molding foreign policy as Philippine president.

“I hope our president will soon realize that diplomacy is always part and parcel of a country’s foreign policy and being the country’s leader, he shapes that policy,” he said.

Senate Minority Leader Ralph Recto said long-standing ties between the two countries “are strong enough that it cannot be weakened or wrecked by a wayward quote.”

“An unprovoked tirade will not drain the deep reservoir of goodwill between Filipinos and Americans,” Recto said.

But like Lacson, he reminded Philippine officials, in general, to be more mindful of their speech.

“This is the time to remind those who officially speak for us to not only clearly articulate our aspirations, but do so in a manner reflective of how we communicate with our friends which is polite, courteous and respectful,” Recto said.

Following Duterte’s expression of regret over his statements against Obama, Philippine officials said on Tuesday that the bilateral meeting of the two leaders have been reset at a later date. – Rappler.com