What PH can learn from Cuba’s health services Facebook Twitter Copy URL
Copied
Health Secretary Paulyn Ubial: 'I'm sure that our universal health care dream will benefit from the lessons that we learned in the Cuban model'

MANILA, Philippines – The Philippines is looking at Cuba to learn a thing or two from the Latin American country’s “efficient and effective” health system.

Upon the strong endorsement of President Rodrigo Duterte, Health Secretary Paulyn Ubial went to Cuba from August 23 to 26 for an official visit. She revealed details of this visit in a September 5 press conference at Malacañang.

Among Cuba’s best practices, according to Ubial, is how its health system produces an adequate number of health professionals, creating a doctor-to-patient ratio that is more than what the World Health Organization is promoting. (READ: Learning from Cuba’s health system: 35,000 more doctors needed in PH)

“In Cuba, they don’t have a mental institution, all their patients are out-patient, and it’s like delivering the services at home to the patients. And… they have some sort of daycare services. If you’re going on vacation, then they can take care of your mental health patient/family member on a two- to three-day period. So, that’s not for the long term,” she explained in a mix of English and Filipino.

Mental health is among Ubial’s major priorities as the new health secretary. While the Philippines has yet to pass a mental health law, the government has already taken initial steps to address certain needs of people with mental health illnesses.

For one, the health department has launched the HOPELINE Project, a 24/7 crisis support hotline for depression and suicide prevention.

Ubial said the Philippines is also looking at a community-based mental health program, which Cuba also has.

She added: “We’re studying if that can be another facility or that can be [an] add-on to the existing rural health unit but actually deploy separate human resources for that.” 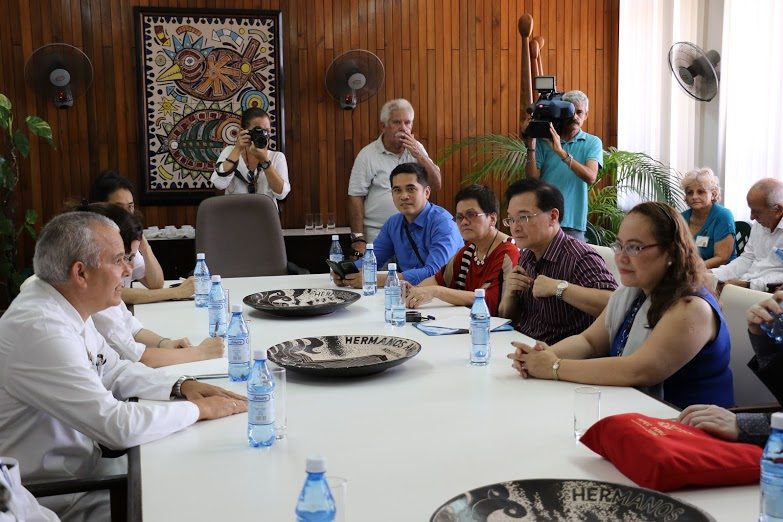 Ubial and her team observed a couple more things while in Cuba, one of which is the country’s referral system. (READ: Health chief Ubial: We’ll spend to the max on frontline services)

Here in the Philippines, however, she believes the private sector can play an important role to support government health facilities.

“There’s been a lot of collaboration and negotiations with the private sector physicians to actually service the rural areas. So, the idea is for them to adopt a hospital or a health facility. So, there is continuing effort of upgrading and capacity-building.”

Ubial also noticed how the Cuban government pays for all health expenses of its citizens, including drugs, medicines, and even the patient’s transportation.

Cuba’s prioritization of health shows in its national budget – a per capita expenditure on health amounting to $460, according to Ubial.

The Philippines, she said, only spends $76 per capita expenditure on health, based on the 2015 budget.

The good news is that the Cuban government has expressed its willingness to cooperate with the Philippines for capacity-building and future exchanges.

“I’m sure that our universal health care dream will benefit from the lessons that we learned in the Cuban model. And we will continue to have this cooperation and relationship with the Cuban Ministry of Health so that we can implement some of their best practices.”

During their Cuba trip, Ubial and her team visited the Ministry of Health, the Family Physicians Office, polyclinics, hospitals, training facilities, and other support facilities such as the country’s mental health unit, the maternity waiting home for high-risk pregnant women, and the home for the elderly. – Rappler.com