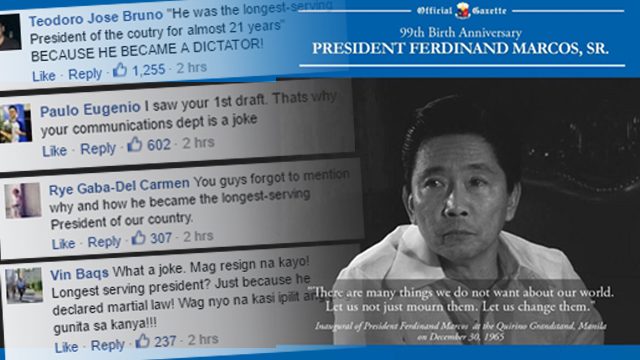 MANILA, Philippines (3rd UPDATE) – In just the span of a few hours on Sunday, September 11, the government’s Official Gazette posted a photo of Ferdinand Marcos on Facebook, edited the photo’s caption, deleted the photo altogether, and then reposted the photo with a shorter caption.

The changes were prompted by a barrage of comments from social media users, who accused the Philippine government of historical revisionism and downplaying the Martial Law era under Marcos, which saw rampant human rights abuses and corruption.

The Official Gazette’s photo was meant to be a tribute for the late dictator on his 99th birth anniversary. It featured a quote, taken from Marcos’ inaugural address on December 30, 1965, that read: “There are many things we do not want about our world. Let us not just mourn them. Let us change them.”

It wasn’t the quote, however, that angered social media users.

It was the last part of the original caption, which read: “In 1972, he declared Martial Law to suppress a communist insurgency and secessionism in Mindanao. In 1986, Marcos stepped down from the presidency to avoid bloodshed during the uprising that came to be known as ‘People Power.'” (READ: Martial Law 101: Things you should know)

After receiving negative comments, the Official Gazette then removed 3 words – “to avoid bloodshed.”

Facebook’s Edit History feature showed the difference between the first and the second captions: The post, however, continued to receive negative comments, with people pointing out that the government seemed to set aside the suffering of Filipinos under the Marcos regime.

The Official Gazette then deleted the photo.

It later reposted the same photo, but with a shorter caption. This shorter caption made no mention of Martial Law or of Marcos’ ouster through the 1986 People Power Revolution. It merely said that the late strongman was “the longest-serving President of the country for almost 21 years.” This triggered another flurry of comments from social media users. Very early on Monday, September 12, the caption was edited yet again.

This time, the caption mentioned the declaration of Martial Law in 1972, and that Marcos “went to exile to the United States in 1986 at the height of the People Power Revolution.”

The latest caption ended by saying that Marcos was “succeeded by Corazon Cojuangco Aquino.” Below is the latest Edit History comparing the most recent version of the caption with the one right before it. On Sunday, shortly before midnight, the Official Gazette issued a statement, denying it committed historical revisionism.

“The Official Gazette of the Republic of the Philippines is the repository of government documents as stated by law. We are not in the business of revising history. We only convey what is documented in the official records,” said the statement, attributed to Presidential Communications Office (PCO) Assistant Secretary Ramon Cualoping III.

Cualoping added: “We continually update materials to keep it as historically accurate as possible. The Official Gazette of the Republic of the Philippines is devoid of any political color and affiliations.” The statement was met with more negative reactions, with Facebook users saying that the Official Gazette’s photo caption was clearly “pro-Marcos” and “conveniently left out key info” about the dictatorship.

Marcos had cited the increasing threat of communism to justify the declaration of martial law. According to his diary entry for September 22, 1972, the alleged ambush of then defense secretary Juan Ponce Enrile made the “martial law proclamation a necessity.”

In 1986, however, Enrile himself disclosed that the supposed ambush was staged to justify Martial Law. (READ: Enrile’s tale: Hypocrisy and contradictions)

People deemed to be subversive were tortured by various means, including electrocution, water cure, and strangulation. (READ: Worse than death: Torture methods during martial law)

Various estimates also put the Marcoses’ ill-gotten wealth at between $5 billion and $10 billion.

The late dictator’s son and namesake, former senator Ferdinand “Bongbong” Marcos Jr, has repeatedly said his family will not apologize for his father’s rule.

The Official Gazette’s controversial Facebook post comes amid heated debate on whether or not Marcos should be buried at the Libingan ng mga Bayani (Heroes’ Cemetery) – a battle that has reached all the way to the Supreme Court. – Rappler.com