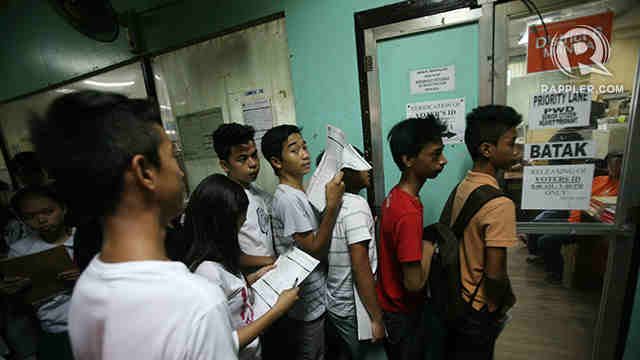 MANILA, Philippines (UPDATED) – The Senate and the House of Representatives approved on 3rd and final reading their respective bills seeking the postponement of the barangay and Sangguniang Kabataan (SK) elections to next year.

The terms of incumbent barangay and SK officials would be extended for a year “unless they are removed or suspended from office.”

Malacañang has pushed for the postponement of the village-based elections, saying the government could save billions of pesos doing so.

President Rodrigo Duterte also said holding local elections this year could only break the momentum of the administration’s war against drugs, as drug money might influence barangay, SK polls.

Senator Juan Edgardo Angara, chairman of the local government committee, said the postponement would allow more time for the full implementation of the recently enacted SK Reform Act or Republic Act 10742 and for the Commission on Elections to ensure higher voter turnout.

(I repeat, we are not putting aside the rights of voters to vote. We are only temporarily postponing it to better conduct elections and make it more meaningful.)

In the House, Alvarez, who led authors of HB Number 3504, is in favor of the postponement because Duterte is yet to complete appointments in several government offices. An election period would ban the President from completing this task until the end of the polls.

The House Speaker also wants to abolish the SK and barangay councils because he claims that “In reality, they are not working.”

Opposition in the Senate

In opposing the Malacañang-backed measure, Recto downplayed the reasons cited by pro-postponement senators. He said the issue of funding would still persist, as the polls are only delayed and not cancelled.

The postponement, he added, would be more costly, as some preparatory activities the Comelec had done, such as voter’s registration, would have to be repeated.

He explained: “In budget-speak, savings accrue from a terminated project, not from a deferred one. So instead of spending at least P7 billion if we will hold the elections this year, we will only delay spending it by a year, so in the end, we will still have to spend that P7 billion.”

He also criticized the government’s reasoning that the election bans would only hamper the administration’s anti-illegal drugs efforts.

The postponement, Recto claimed, would allow more corrupt barangay officials to stay longer in power and “rob” residents of the chance to remove their leaders who participate in crimes.

“Those who are barangay captains and drug captains at the same time will have a one year free pass, not courtesy of the people but of their fellow politicians,” Recto said in his speech.

(Good barangay leaders are still the majority. There are far more of them who truly serve, who sacrifice, who give their all. But there are also a number who need to be replaced already.) – Rappler.com