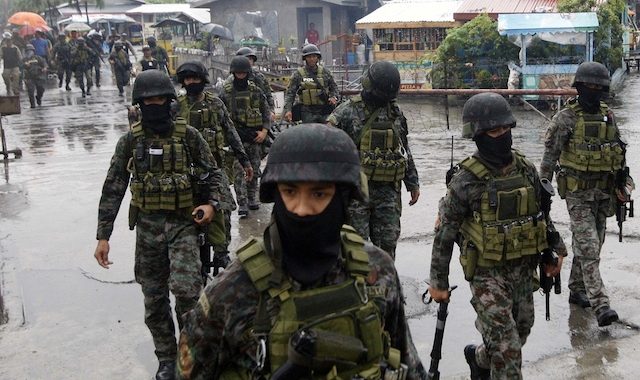 De Lima made the statement a day after Police Director General Benjamin Magalong revealed in a House hearing that De Lima excluded the CIDG from the high-level operation even if they reportedly suggested its implementation in the first place.

Magalong, now the Deputy Chief of Operations or the PNP’s third-in-command, was CIDG chief at the time of the raid which grabbed headlines for the lavish contraband items seized from the high-profile inmates.

“Another thing that was confirmed by General Magalong, was when he said when he first approached me, he saw a diagram. That’s proof that even before sumama sa amin si General Magalong (joined us) and offered to also particpate as he had his own Oplan, we were already starting all of this. We are already discussing the situation in Bilibid,” De Lima said.

In the end, it was the National Bureau of Investigation (NBI) that took the lead in the raid, which De Lima herself headed. The NBI is an agency under the Department of Justice.

“The whole operation, the lead agency was still the DOJ through NBI and the [Bureau of Corrections (BuCor)]. That is one of the reasons why ultimately, I did not adopt the proposal of General Magalong that was Oplan [Cronus]. He said something about volunteering to be ground commander,” said De Lima.

She added: “I cannot do that especially when I discussed it already with [Reginald] Villasanta from the Presidential Anti-Organized Crime Commission] and also [BuCor chief Franklin Jesus] Bucayu] that since BuCor is under DOJ, the lead should be DOJ… If the leader is PNP, that would not be acceptable to General Bucayu.”

Over two days, the House committe on justice held hearings to probe allegations that De Lima coddled drug lords and benefited from their operations during her stint as justice secretary. De Lima has hit the probe as a “sham,” supposedly in retaliation for launching a Senate probe into the rise of killings linked to President Rodrigo Duterte’s “war on drugs.”

The senator could neither confirm nor deny a supposed meeting where Bucayu asked Magalong to cancel the operation because he would be “killed” as a result, but expressed doubt it would happen.

“He [Bucayu] can talk to me anytime. And we did talk, we did meet many times. He was the BuCor director. Why would he say, schedule me? He can go directly to me,” said De Lima, reacting to Magalong’s claim that Bucayu asked him to call the senator on his behalf.

Personal “dynamics” between the officials were also taken into consideration. All 3 – Bucayu, Villasanta, and Magalong – were police generals and graduates of the Philippine Military Academy.

“I could sense there were dynamics within and among these police officers… they had some issues with General Magalong, personality-related issues, I remember that,” said De Lima, referring to Bucayu and other top officials who were then under the DOJ.

The senator, said, however, that she respects Magalong. “I have no problem with General Magalong, I perceive him as a professional official.”

She said Magalong himself said that he was dismayed by the exclusion of CIDG from the operation.

De Lima also said it was “outrageous” to imply that she merely held the raid for show or that she did it to protect her supposedly preferred inmate, Jaybee Sebastian. Convicts serving as witnesses in the house probe accused De Lima of coddling Sebastian, who supposedly ran illegal drugs operations while incarcerated.

In the aftermath of the 2014 raid, De Lima singled out the so-called “Bilibid 19,” convicts at the Maximum Security Compound who were considered “high-profile” or had continued links to illegal drugs. The 19 were transferred to the NBI headquarters in Manila but Sebastian stayed behind.

Convicts alleged at the House hearing that it was during this time that Sebastian supposedly consolidated his hold on illegal drugs operations inside Bilibid.

To explain why Sebastian was not lumped in with the Bilibid 19 after the 2014 raid, the senator said Sebastian was a government asset. – Rappler.com