Duterte on drug list: ‘I had it revalidated again’ 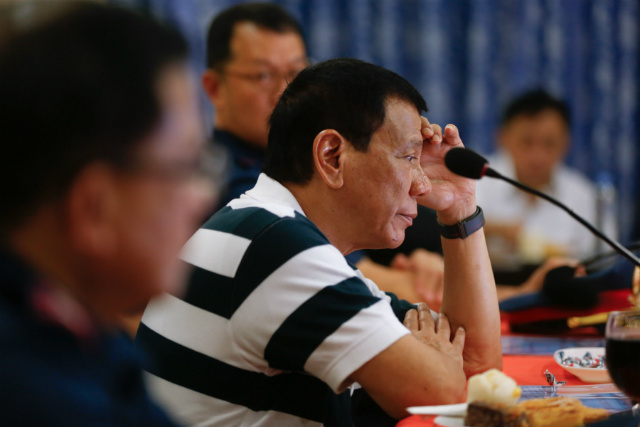 MANILA, Philippines – President Rodrigo Duterte said he has ordered his men to revalidate the list of around 1,000 alleged drug pushers and drug lords, including barangay captains, mayors, and governors.

“I had it revalidated again kasi may mga nakita ako doon na mga kaibigan ko na hindi ko sukat akalain (because I saw there some friends whom I never imagined will be there),” Duterte said in an interview before midnight on Thursday, September 22.

Duterte made this remark after he was asked when he would release this list of drug personalities.

Explaining why the revalidation was needed, the President cited the case of a certain “General Espino” whom he could not “connect” to the bigger picture.

Referring to Espino’s case, he said: “I hit a snag there, e. Kaya nu’ng pina-revalidate ko na sa mga mismong tao ko na, hindi ko ma-connect si General Espino, governor ng ano. So ibinalik ko na naman kagaya ng iba.” (So when I had it revalidated by my men, I couldn’t connect General Espino. So I returned it again, like the rest.)

Earlier, 68-year-old former Pangasinan governor Amado Espino Jr had been included in Duterte’s matrix of the prison drug trade. He is a former police and military officer.

“Kindly try to give me an idea how does this guy came into the picture or for that matter, why is his name there. So give me an idea – the link, I need a link, either a person or event somewhere,” the 71-year-old Duterte said in a mix of English and Filipino.

The President earlier said he is set to reveal a new and final list of alleged drug pushers and drug lords, which includes barangay captains, policemen, mayors, and governors.

This new list is supposedly 6 times longer than his previous roster of 158 drug personalities.

This is part of Duterte’s war on drugs, which has killed more than 3,330 people since he took office last July 1. – Rappler.com