Duterte: No amnesty for Abu Sayyaf 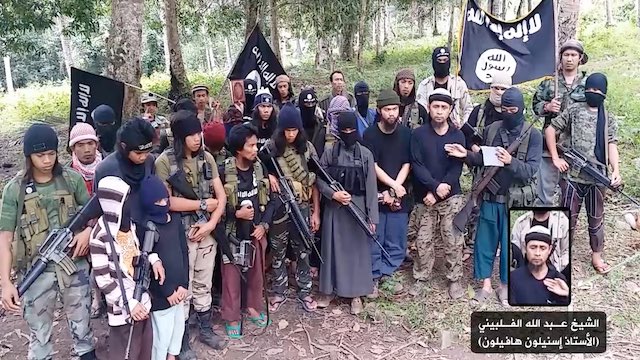 “The Abu Sayyaf were decapitating people like they would just fowls and pigs and goats. And there will be no talks. The Armed Forces is right, rejecting amnesty for them. I will not, I will never. There will never be an amnesty for so much killing,” said Duterte on Monday, September 26.

He was speaking at the oath-taking ceremony of Malacañang Press Corps officers at the Palace.

Misuari had facilitated the release of Norwegian hostage Kjartan Sekkingstad from the ASG. According to an exclusive Rappler report, Misuari may have even earned from Sekkingstad’s release.

“Then Nur, problem is Nur, parang hinihigop niya iyong – isali na niya iyong Abu Sayyaf (it’s like he wants to include the Abu Sayyaf), which I would like to tell the nation now: No. I will not talk peace with the Abu Sayyaf,” said Duterte.

He is averse to the idea because including the bandit group in talks would be “like slapping the nation,” said Duterte.

The President also described the group’s beliefs as “despicable.”

The Duterte administration is heightening its crackdown on the ASG, sending thousands of troops to Jolo, Sulu, the group’s stronghold. Duterte has vowed to “destroy” the group.

But he has blasted the group for its “ungodly” acts such as gruesome beheadings of hostages and kidnap-for-ransom schemes. – Rappler.com