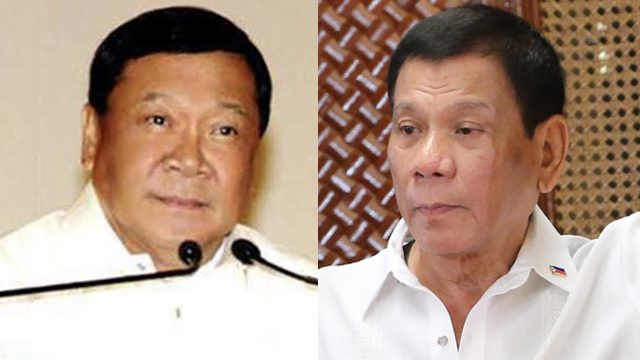 In a news conference after he inspected a shabu laboratory at the foot of Mount Arayat in this province, Duterte apologized to Espino, Pangasinan District Board Member Raul Sison, and Pangasinan Provincial Administrator Raffy Baraan.

“I’d like to apologize to you publicly. I say now, I’m very sorry. Trabaho ko ‘yan (That’s my job); it’s part of my territory. Sometimes you’re correct that life is not fair,” he said.

“Insofar as the drugs I think that somehow we were negligent in counterchecking in the first report,” Duterte said.

Duterte was referring to a “drug matrix” that implicated several local officials, and government bureaucrats with supposed links to Senator Leila de Lima and her alleged involvement in the illegal drugs trade when she was justice secretary overseeing the Bureau of Corrections.

Espino, a Liberal Party ally, was tagged in the matrix as the “richest politician in Northern Luzon” who has “amassed unexplained wealth.”

Duterte said he was taking “full responsibility” for the lapses in the creation of the list.

“I take full responsibility [dahil] ako nag-announce (because I announced it),” he said.

(I’m not full of “fried chicken” like others. I have a bad mouth but when I make a mistake, it comes from the heart, I’m sorry.)

“Fried chicken” is a local pun for “pride.”

The President explained that “there was a gap that can’t be explained” between Baraan and Espino.

This was despite having the report validated at least 4 times. The President said in an ambush interview late Thursday, September 22, that he had that particular matrix revalidated again as he could not find any links between Espino, among others, to illegal drugs.

He added: “Kung meron man [link] it’s either intriga, tsismis (If there were any links, it’s either just intrigues, rumors) or it is purposely done without really checking the validity.”

Duterte said, however, that there was “probable cause” in terms of the officials’ alleged links to black sand mining operation, as alleged in the drug matrix. He said he would not apologize for making this allegation.

Espina had earlier met with Duterte to ask him for a chance to clear his name.

The President in turn ordered an investigation on the former governor. Region 1 police had also been told to probe the alleged links of the personalities mentioned to the illegal drugs trade in the New Bilibid Prison. – Rappler.com