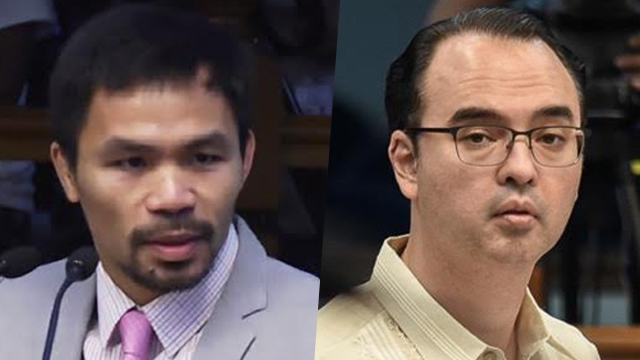 MANILA, Philippines – Staunch allies of President Rodrigo Duterte in the Senate blamed the testimony of witness Edgar Matobato for the bad reputation of the Philippines abroad.

Senators Alan Peter Cayetano and Manny Pacquiao said the international media have made a mistake in playing up Matobato’s “lies,” as both urged the Senate to end its investigation into the spate of extrajudicial killings.

This came up during the 5th Senate hearing into the extrajudicial killings on Monday, October 3, when Senator Leila De Lima was called out for allegedly keeping the kidnapping case filed against the witness a secret. (READ: De Lima walks out after Gordon chastises her)

Cayetano said foreign media have been taken for a ride by Matobato.The senator lamented how international news agencies have called the President “a mass murderer” in their front pages on the basis of a supposed faulty testimony.

“I think the committee can forgive, the PNP can forgive, the Filipino people can forgive that we were taken for a ride. The problem, Mr Chairman, because that Mr Matobato was allowed here without vetting him, without disclosing that case, BBC, CNN, New York Times, and The Washington Post put on their front page that the President is a mass murderer,” Cayetano said.

“They put on their front page that the President fed enemies to crocodiles,” he added, referring to Matobato’s accusation against members of the Davao Death Squad, which the witness claimed to have been part of.

Cayetano insinuated that foreign media had access to Matobato before he testified at the Senate hearing. He then challenged international news agencies to also highlight the supposed lies of the witness now.

“Some of these publications came out before Matobato testified here. I’m trying not to be emotional here. I just don’t want Europeans, Chinese, Japanese, thinking this is the kind of country we are running,” he said.

“I don’t know how, but I challenge these foreign media, now put on your front page that this witness also took you for a ride because you printed it without checking first and cross-examining this witness,” he added.

Cayetano made the call as Duterte drew international attention for his controversial statements against the Pope, US President Barack Obama, United Nations Secretary General Ban-Ki Moon, the United Nations, and the European Parliament. His recent statement comparing Adolf Hitler’s annilihilation of Jews in the last war and his own bid to “slaughter” millions of drug addicts, has sparked global outrage.

The President has repeatedly said he does not care about what the international community thinks of him but apologized to the Jewish community over his Hitler remark.

Pacquiao, for his part, called Matobato’s “lies” as an insult. He insisted that the witness’ claims are inconsistent.

The neophyte senator then blamed Matobato for damaging the country’s reputation.

(His testimony, everything he revealed here to convince people to believe him, have damaged the country big time. All sorts of news have reached other countries. Mr Chairman, what happens to the image of our country now?)

Earlier in the 13-hour hearing, Gordon also took a swipe at the international media, as he said foreigners should not hesitate to visit the Philippines amid the spate of killings linked to the state’s war on drugs – the primary subject of the Senate hearing.

“We have to be accountable. To the media here, the foreign media, I don’t care what you say about us. We have not thrown the rule book because the Senate is investigating extrajudicial killings, whatever you want to define it,” said Gordon, chairman of the Senate committee on justice and human rights leading the probe.

“The law has not been thrown kaya ‘wag kayo matakot sa Pilipinas (so don’t fear the Philippines) because the Senate is investigating,” Gordon stressed.

Duterte’s allies earlier said the Senate probe, which De Lima initially led before being ousted, is to be blamed for the international backlash.

De Lima, however, said she is not the root cause but the President’s foul mouth and his apparent endorsement of summary executions. (READ: De Lima: Duterte ‘single-handedly’ ruins PH image abroad)

Duterte, who ran and won on a platform of change and ending criminality withing 3 to 6 months, a target he has asked extended to 6 more months, has repeatedly supported the killing of drug pushers and users and had earlier said that the fight against illegal drugs would be “bloody.“

Duterte had earlier ordered authorities to investigate unexplained killings in the war on drugs, which he had attributed to rival criminal sydicates killing off each other. (READ: Duterte on extrajudicial killings: Better for criminals to kill each other) – Rappler.com