US says EDCA is binding, reminds PH of aid after Yolanda

Oct 5, 2016 9:01 AM PHT
Carmela Fonbuena
Facebook Twitter Copy URL
Copied
US Press Secretary Josh Earnest says the American government is confident that Filipinos recognize the benefits of close ties with the US 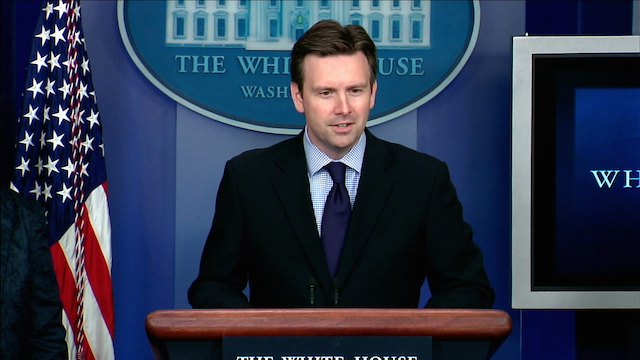 MANILA, Philippines – US Press Secretary Josh Earnest said the military-to-military deal between the Philippines and the US that President Rodrigo Duterte is putting under review is a “binding” agreement that may only be withdrawn through a formal process.

Earnest said the US remains “committed” to strengthen its alliance with the Philippines, noting US assistance to the Philippine military and the victims of the 2013 Super Typhoon Yolanda (Haiyan) that devastated the Visayas region.

The Enhanced Defense Cooperation Agreement (EDCA) was signed in 2014 under the previous Aquino administration to increase US presence in the Philippines amid escalating tension in the West Philippine Sea (South China Sea). It allows US forces to build facilities and place assets inside military bases.

“As it relates to the defense agreement, it’s, of course, a binding one, and there’s a formal process for withdrawing from it or changing it, and I’m not aware that that process has commenced in any way,” Earnest said on Monday, October 3, at a regular White House press briefing in Washington, DC.

The briefing was held after the Philippine president questioned the validity of the agreement without the signature of Aquino, but before he told US President Barack Obama to “go to hell.” These are the latest in a series of Duterte’s tirades against the US, whose ties with the Philippines he is threatening to cut.

International agreements do not require a president’s signature, however. EDCA was signed by Aquino’s defense secretary Voltaire Gazmin and US Ambassador to the Philippines Philip Goldberg. The deal has a period of 10 years and is renewable.

Duterte’s pronouncements have not been translated to formal directives.

Earnest said Duterte’s plan to strengthen alliances with China does not have to hurt its ties with the US, citing the relations of China with Japan and South Korea.

“Sometimes it’s difficult to determine precisely what President Duterte’s intent is in offering public comments, but if his intent is to seek a more effective relationship with China, that doesn’t undermine US positioning in that region of the world,” Earnest said.

“When they’ve had conversations with President Xi [Jinping] or other senior Chinese officials, what we’ve said at every turn is that the United States believes it’s in our interest for our closest friends in the Asia Pacific to have an effective working relationship with the Chinese,” he said. (READ: Recalibrating PH-US alliance under Duterte)

Duterte was scheduled to meet Obama on the sidelines of the ASEAN meeting in Laos in September, but their talks were cancelled after Duterte’s “son of a bitch” comment.

Earnest said the US remains “committed” to the Philippines, confident that Filipinos recognize the benefits of the alliance.

He cited Obama’s state visit in Manila in 2014, a few hours after the signing of EDCA, where the US president showcased the transfer of a US Coast Guard vessel to the Philippine Navy to become its most capable warship.

He also cited US assistance to the small country’s maritime security efforts, counter-terrorism campaign, and the rapid mobilization of US troops and assets in the aftermath of Super Typhoon Yolanda in 2013. (READ: Duterte’s pivot to China won’t be easy for Americanized AFP)

The same message was echoed by the Americans in Manila on Tuesday, October 4, during the opening ceremony of the Philippine-US Amphibious Landing Exercises (Phiblex). (READ: US, PH marines link arms amid uncertainty)

“The relationship building and  capability enhancement [pays off] during natural disasters, thus allowing our combined troops to preserve life. Response in hours versus days helps us save lives. This was proven in 2013 when Supertyphoon Yoalnda [hit the Philippines]. Within 4 hours, Ospreys arrived to support humanitarian assistance and disaster relief operations,” said Brigadier General John Jansen, commander of the US Marine 3rd Mechanized Brigade, in his speech at the ceremony.

US Marine Mike Wiley, one of the US officers who took the first C130 flight to Tacloban City after the typhoon, is among those who returned to the Philippines to join the war games that Duterte threatened to be the last.

“It’s good to be back in the Philippines,” said Wiley, refusing to comment on the uncertainty of future war games. – Rappler.com