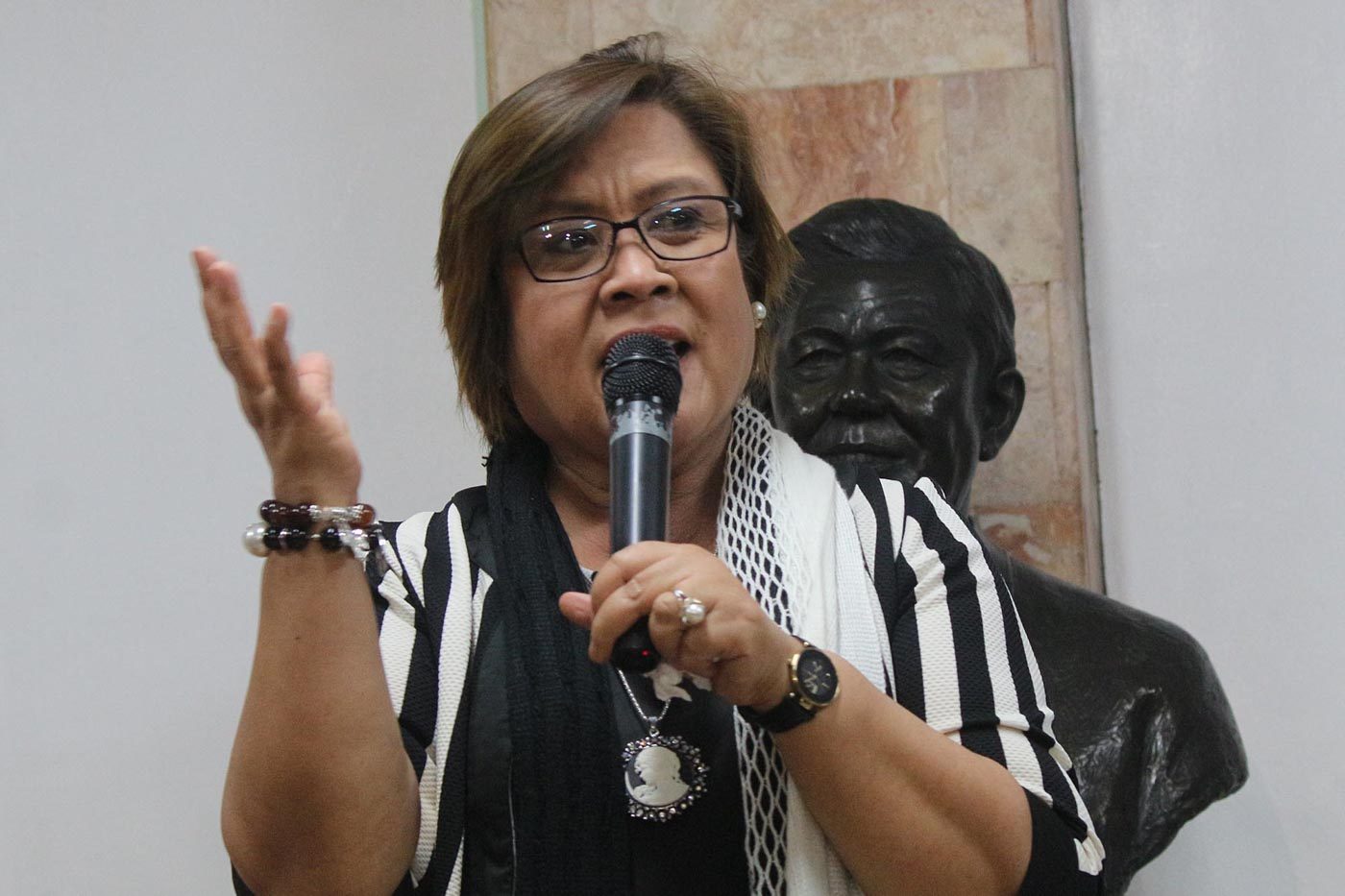 MANILA, Philippines – They said there would be none of it but the House of Representatives on Thursday, October 6, still allowed the narration of Senator Leila de Lima’s alleged sex video at a congressional inquiry.

De Lima condemned this, saying the supposed video has no connection to her alleged links to illegal drugs in the national penitentiary – the subject of the House probe.

The senator, who has been accused of involvement in the drug trade by no less than President Rodrigo Duterte, said what the House did is offensive. She again denied it was her in the video.

(So even if the showing of the alleged sex video will not push through, the fact that they allowed the narration of it is equally objectionable. I really find it revolting. They don’t even realize that. What is the connection of that? They just want to humiliate me.)

Joenel Sanchez, a member of the Presidential Security Group who was once a close aide of De Lima from 2010 to 2015, explained in detail the alleged video of De Lima and Ronnie Dayan, her alleged lover and former driver.

Sanchez had a falling out with the senator after she supposedly refused to help him when his father had a heart attack. De Lima even got angry at him, Sanchez claimed, when he asked for another politician’s help.

For the embattled senator, the House’s move is a form of slut-shaming. The alleged video cannot even prove, she said, that Dayan was indeed her bagman.

De Lima added that she was close to all members of her security team.

(All members of my security team, more or less, have become close to me in the sense that, of course, I entrust my life to them. So why do they have to look into those kinds of things if they only want to prove that Ronnie Dayan could be my bagman? That’s still connected to slut-shaming.)

The Senate earlier adopted a resolution condemning the plan of the House to show De Lima’s alleged sex video, calling it “illegal” and “violative of inter-parliamentary courtesy.”

Some lawmakers also opposed the move despite the backing of Speaker Pantaleon Alvarez, a party mate of the President.

It was the President who first brought to public attention the alleged video of the senator. He also accused Dayan of collecting money inside the New Bilibid Prison for De Lima, which the latter has repeatedly denied.

Testifying before the House committee on justice, Sanchez recalled how he first found out about the video in 2012. He claimed it was De Lima’s driver “Bantam” who showed it to him after Dayan left his phone inside the car parked at the Malacañang compound.

(I was surprised when Bantam showed the videos of SOJ De Lima and Ronnie Dayan. There were two sex videos. In one video, SOJ De Lima was posing naked near the shower room, while in the other one she was performing “BJ” to Ronnie Dayan. I felt uneasy with what I saw and I did not finish watching. It just became a topic of our jokes.)

Sanchez also claimed that when Dayan was still the head of the senator’s security group, the two’s “sweetness” was evident.

He said that after duty, Dayan would stay at De Lima’s house, and the two would also sleep in the same room during out-of-town trips.

(We frequently went to the house of SOJ De Lima in Bicol and their sweetness was really evident. While we were traveling to the province, they would feed each other bananas.)

(Every time we went to the grocery, SOJ De Lima bought Ronnie Dayan his favorite Fundador and Marlboro. She bought him a barong, shoes, and other personal things until Dayan eventually paraded his relationship with De Lima.)

Sanchez also claimed that De Lima and Dayan had a falling out after a certain Warren Cristobal became part of the team.

Sanchez said the closeness of Cristobal and De Lima was noticeable, leading them to think that the two had a relationship. Duterte also earlier revealed this detail of De Lima’s private life.

De Lima has neither confirmed nor denied her relationship with Dayan, only saying she is close to him. She refused to elaborate, saying such details were part of her private life. – Rappler.com