DOH hopes EO on smoking ban out by end-October

Oct 11, 2016 11:15 AM PHT
Jee Y. Geronimo
Facebook Twitter Copy URL
Copied
Health Secretary Paulyn Ubial bares more details of the draft executive order being reviewed by the Office of the President during a budget hearing at the Senate 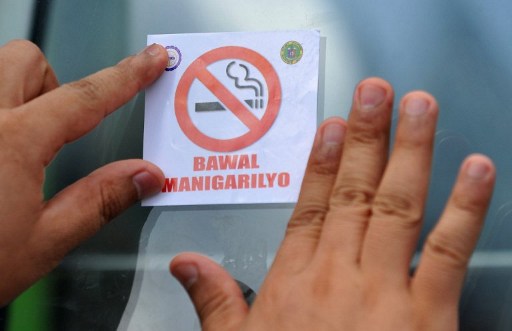 MANILA, Philippines – The Department of Health (DOH) hopes the executive order on a nationwide ban on smoking in all public places will be issued by the end of October, or before the full implementation of the Graphic Health Warnings Law.

“[The EO is with the] Office of the President right now, and we hope it will be issued by the end of month, before the full implementation of the graphic health warning law which is November 4,” Ubial said.

Under Republic Act 10643 or the Graphic Health Warnings Law, retailers and sellers of tobacco products shall ensure the removal from their displays all  noncompliant tobacco products manufactured, imported, distributed, or sold by them starting November 4.

On Tuesday, Ubial said President Rodrigo Duterte directed her to include “two very important provisions” in the draft EO:

The President’s directive, Ubial said, is to implement what Davao City implements.

“In public places, they designate a smoking area away from the public. [This could be the] back of a hotel, or a parking area where no public will be exposed [to cigarette smole],” she added.

Senator Nancy Binay asked if smoking will also be banned inside casinos, but Ubial said they “will still work it out with implementing agencies” or national government agencies.

“Why an exemption?” Senator Loren Legarda asked Ubial. “It can’t be just cooperating [local government units], they can refuse.”

Binay then asked about details on penalties for violators.