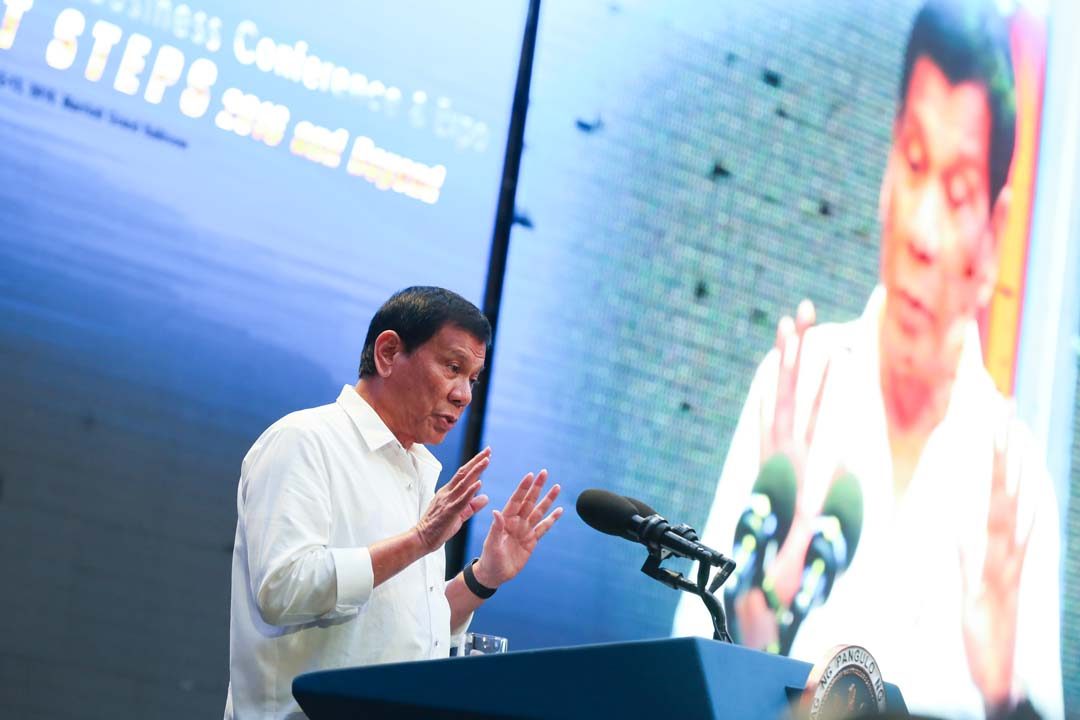 Facebook Twitter Copy URL
Copied
President Rodrigo Duterte and President Xi Jinping will witness the signing of bilateral agreements as well as 'a lot' of business deals between Philippine and Chinese businessmen, says the DFA

MANILA, Philippines – Trade and investments will be the primary focus of President Rodrigo Duterte’s upcoming state visit to China, the Philippines’ Department of Foreign Affairs (DFA) said on Friday, October 14.

DFA spokesperson Charles Jose said in a Palace news briefing that the big business delegation set to accompany the President on the trip reflected the “direction” that the Philippines is taking in terms of its bilateral relations with the regional giant.

“In the trade and investment area, the fact that we are bringing a lot of our business people to China, that’s a very clear signal of the direction that we are taking in terms of carrying out our bilateral relations with China now. We can now see by this the importance we are giving to our trade and commercial ties with China,” Jose said.

Jose could not confirm the number of businessmen in the delegation since the list is still being finalized by the Department of Trade and Industry. But business leaders have told Rappler that around 400 are joining the trip.

During Duterte’s visit from October 18 to 21, the Philippines and China will sign bilateral agreements, while Chinese and Philippines companies will sign “a lot” of business contracts, the DFA official said.

“Aside from the government-to-government MOUs [Memoranda of Understanding] and MOAs [Memoranda of Agreement], there will be a lot, and I mean a lot, of business contracts that will be signed,” said Jose.

“Those are the areas that the Chinese side is very interested to invest in in the Philippines and do business in with the Filipino counterparts,” Jose added.

The Philippine business delegation is expected to attend a trade and investment forum with Chinese businessmen in Beijing, which will be keynoted by Duterte.

The focus on economic ties is part of the foreign policy direction of the Duterte administration. It envisions a “two-track” system of dialogue with China, whose actions in the South China Sea had prompted the Aquino administration to bring it to court.

Philippines-China relations were strained by the Philippines’ decision to seek international arbitration on the dispute, which it won. China has refused to recognize the ruling as well as any bilateral negotiations premised on the Philippine victory.

Jose reiterated the Philippine position on the dispute in the context of overall ties with China, the same stance taken by the Aquino administration.

“The South China Sea dispute is not the sum total of our relations with China. We can deal with it separately but, at the same time, we can develop and strengthen our other areas of cooperation with China including trade, investment, tourism, people-to-people exchanges,” said Jose.

What about the South China Sea?

After their bilateral meeting, Xi and Duterte are expected to witness the signing of bilateral memoranda of understanding and agreement in various areas. They will also issue a joint statement to “stress areas of cooperation,” Jose said.

Asked if Duterte is expected to bring up the West Philippine Sea dispute and rights of Filipino fishermen to fish in Scarborough Shoal, Jose said, “I can’t say what the President will take up with President Xi Jinping.”

However, Jose said the rights of Filipino fishermen are a “top priority” for the President. (READ: Chinese Coast Guard shoos away PH fishermen from Scarborough)

On possible discussions on the arbitral court ruling that nullified China’s claims in the West Philippine Sea, Jose said the public would just have to wait and see. “We leave it to the President’s wisdom and judgement  as to when he thinks the time is appropriate to bring up this matter with the Chinese,” he said.

Duterte had said he does not want to “flaunt” the ruling and preferred to bring it up at a “proper time.” However, he has also said that Beijing cannot avoid the ruling forever.

In Beijing,  Duterte may visit law enforcement and drug rehabilitation centers to see how China is dealing with the illegal drug trade, said Jose.

Duterte had often said that most of the illegal drugs in the Philippines come from China and are distributed by Chinese drug lords.

At the start of his presidency, he said he would confront Chinese officials about the involvement of Chinese nationals in the Philippines’ drug trade, but only after “bigger issues” are dealt with.

China has responded to this concern, declaring it supports Duterte’s anti-drugs campaign.

A Chinese businessman has helped fund a mega drug rehabilitation facility in a military camp in Nueva Ecija, an initiative Duterte has thanked China for.

As in previous foreign trips, Duterte will take time to meet with the Filipino community in China. – Rappler.com