Oct 26, 2016 1:24 PM PHT
Pia Ranada
Facebook Twitter Copy URL
Copied
The Philippine President tells Japanese businessmen that he does not 'pick quarrels with our friends and neighbors' but that he must stand up for the 'dignity' of Filipinos 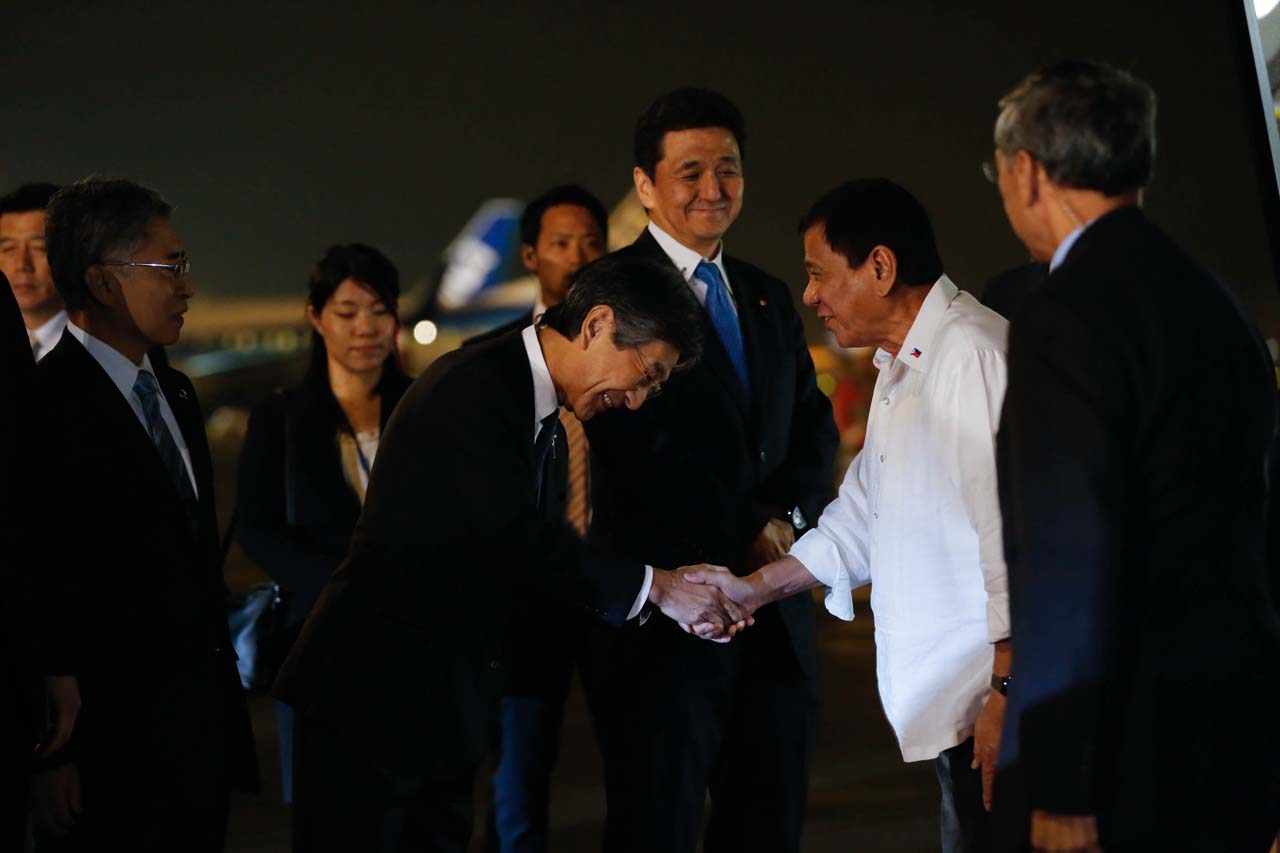 MANILA, Philippines – After reading a prepared speech in front of Japanese and Filipino businessmen, the first thing President Rodrigo Duterte did was to assure the Japanese that he has no intention of forging a military alliance with China.

“I went to China for a visit and I would like to assure you that all there was was economics. We did not talk about arms, we did not talk about stationing of troops, we avoided talking about alliances, military or otherwise,” he said on Wednesday, October 26, in a Tokyo hotel.

Duterte’s official visit to Japan is on the heels of his state visit to China. Japan and China are locked in a territorial dispute over the Senkaku (Diaoyu) Islands in the East China Sea.

The Philippine President assured Japan that investments and trade were the central focus of his China trip, not maritime disputes or military agreements.

“What happened really, there was just a few platforms wherein investments could come in. You know, historically, we only have this short window in our dealings with China. With my visit, we hope that the window will come in a better light and bigger than usual so we can trade freely,” he said.

The Philippine President then reminded Japan that, under his administration, the Philippines will pursue an “independent foreign policy,” one that doesn’t start fights with “friends.”

“I would like to make it clear to everybody that we do not pick quarrels with our friends and neighbors, but to me, it is hightime that the President stands up to its dignity as a people,” he said.

Meanwhile, Japan has donated 10 coast guard vessels to the Philippines.

Duterte did not fail to touch on one of his favorite talking points of late: his beef with the United States for criticizing his campaign against illegal drugs.

Emphasizing his claim that there are 3 million drug addicts in the country, Duterte said his Western critics fail to appreciate the magnitude of the Philippines’ drug problem.

“Here are my friends, supposedly, making it hard for my country to solve and even to survive as a nation,” he said.

He accused the US for thinking of the Philippines as “a dog barking for the crumbs of their favor.”

Duterte repeated his intention to one day scrap the military alliance between the Philippines and US, the Enhanced Defense Cooperation Agreement (EDCA).

“I want, maybe, in the next 2 years, my country, freed of the presence of foreign miltary troops. I want them out, and if I have to revise or abbrogate agreements, executive agreements, I will,” he said.

Duterte assured his audience, Japanese investors among them, that his government does not condone extrajudicial killings.

“It was never a state-sponsored killing but those were the infightings of the police generals and some military men and a lot of policemen, 6,000 of them, cleansing and hoping they would make it clean before I assumed office,” he said.

Despite his rant against US, Duterte was noticeably more subdued and controlled in this speech compared to his speech in front of Chinese businessmen.

He left out colorful insults against Americans, did not mention any “separation” from allies, preferring to talk about an “independent foreign policy.”

Duterte ended his speech by saying, “There is such a thing as a dignity of the Filipino people.”

As in China, his audience then gave him a standing ovation. – Rappler.com