Pichay files ethics complaint vs Barbers after near brawl in House 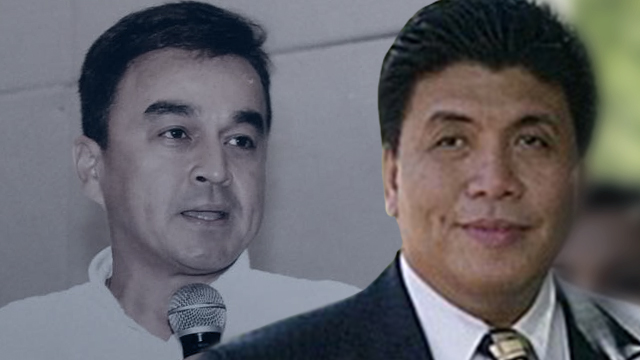 A copy of the complaint was sent to the media on Wednesday, October 26, a day after Pichay filed the document.

In his complaint, Pichay said Barbers had violated Section 139a, Rule XIX of the House rules, which states: “A Member shall act at all times in a manner that shall reflect creditably on the House.”

Pichay and Barbers had a heated exchange during the October 12 hearing of the House committee on constitutional amendments, which tackled bills seeking to amend the 1987 Constitution. (READ: House panel votes: Amend charter through Constituent Assembly)

While the hearing was suspended, Barbers walked toward Pichay. The two legislators were heard hurling expletives at each other.

Barbers then pointed at the face of Pichay, who was seated. Pichay pushed away the other lawmaker’s hand, then stood up. As the two congressmen tried to push each other, some of their colleagues stood between them and managed to break up the fight.

After the confrontation, Barbers apologized to the public but refused to say sorry to Pichay.

“Rep Barber’s acts constitute a disorderly behavior and therefore can be considered a dishonorable act not only against me but the entire institution which is the House of Representatives,” said Pichay, who had previously announced he would file the complaint.

“Rep Barber’s act is the complete opposite of being creditable as he did not conduct himself in a manner that is befitting to his stature as member of the House,” added the lawmaker.

House rules say that the chamber may punish any of its members if the ethics committee finds him or her guilty of violating the Code of Conduct.

Speaker Pantaleon Alvarez already said he felt “ashamed” for the actions of Barbers and Pichay, but added that he would let the ethics committee decide on the case should a complaint be filed.

Barbers said he was not surprised by the ethics complaint he is now facing.

“That complaint was expected already a long time ago. Granting that he filed, that is his right…But that does not preclude me from filing the same complaint,” Barbers told Rappler in a phone interview.

He said he plans to file a “more meaty” counter-complaint against Pichay within the next two weeks.

“His action of dominating the proceedings and bullying some of the members who wish to speak but insulted by Pichay is the one that is dishonorable, considering also that he is not even a member of the committee or an author of a resolution,” said Barbers.

He also expressed discomfort that the House of Representatives’ reputation is on the line because of his spat with Pichay.

“Actually, nahihiya lang ako na lumalaki ‘yung issue. Kawawa naman ang image ng House,” said Barbers. (Actually, I am ashamed that the issue is getting out of hand. The image of the House is at stake.)

He and Pichay, however, had previously been in conflict before.

In 2005, Pichay wanted to kick Barbers out of their party, the Lakas-Christian Muslim Democrats of then president and Pampanga 2nd District Representative Gloria Macapagal Arroyo, for backing the impeachment complaint against Arroyo.