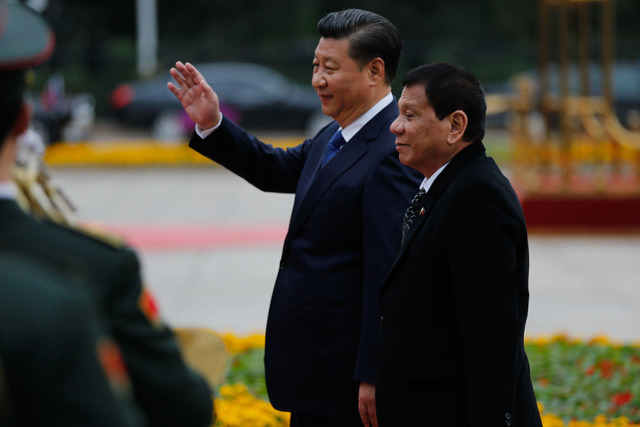 BEIJING, China – A Chinese state-owned company said to have been involved in Beijing’s island-building in the South China Sea signed a deal to construct islands for rival claimant the Philippines as its President Rodrigo Duterte visited last week, reports said.

CCCC Dredging will create 4 artificial islands totalling 208 hectares of reclaimed land in Davao, the port city on the southern island of Mindanao where Duterte was mayor, the Beijing Youth Daily reported.

The islands will spread along 8 kilometers of coastline and be used for government buildings, commercial spaces, residences, ports and industry in a project to be completed by 2019, it added.

The deal with the Philippines’ Mega Harbor Port and Development was one of several inked as Duterte paid a state visit to China last week, when Beijing offered $9 billion in soft loans for development projects.

Duterte has sought to restore his country’s ties with China, brought low by a territorial dispute over the South China Sea, and during his trip announced his “separation” from longstanding Philippine ally the United States. (READ: Duterte says he will not sever U.S. ties)

In a case brought by his predecessor Benigno Aquino, the Philippines won a resounding victory at an international tribunal earlier this year over Beijing’s extensive claims, infuriating the Asian giant.

China has built up artificial islands, some with airstrips, capable of hosting military facilities.

Dredging vessels owned by CCCC Dredging subsidiary CCCC Tianjin Dredging were spotted working in the Spratly archipelago disputed by Manila, according to an analysis of satellite imagery from IHS Jane’s Intelligence Review.

In the Davao project, a perimeter of sand bags will be dropped into the sea, and sand pumped into the space, displacing water until an island is formed, the Monday report explained.

CCCC Dredging, a subsidiary of the China Communications Construction Company (CCCC), is the world’s largest by dredging capacity, according to the official website of the Chinese shipping industry.

It delayed an initial public offering on the Hong Kong stock exchange last year due to concerns over its work in the Spratlys.  – Rappler.com