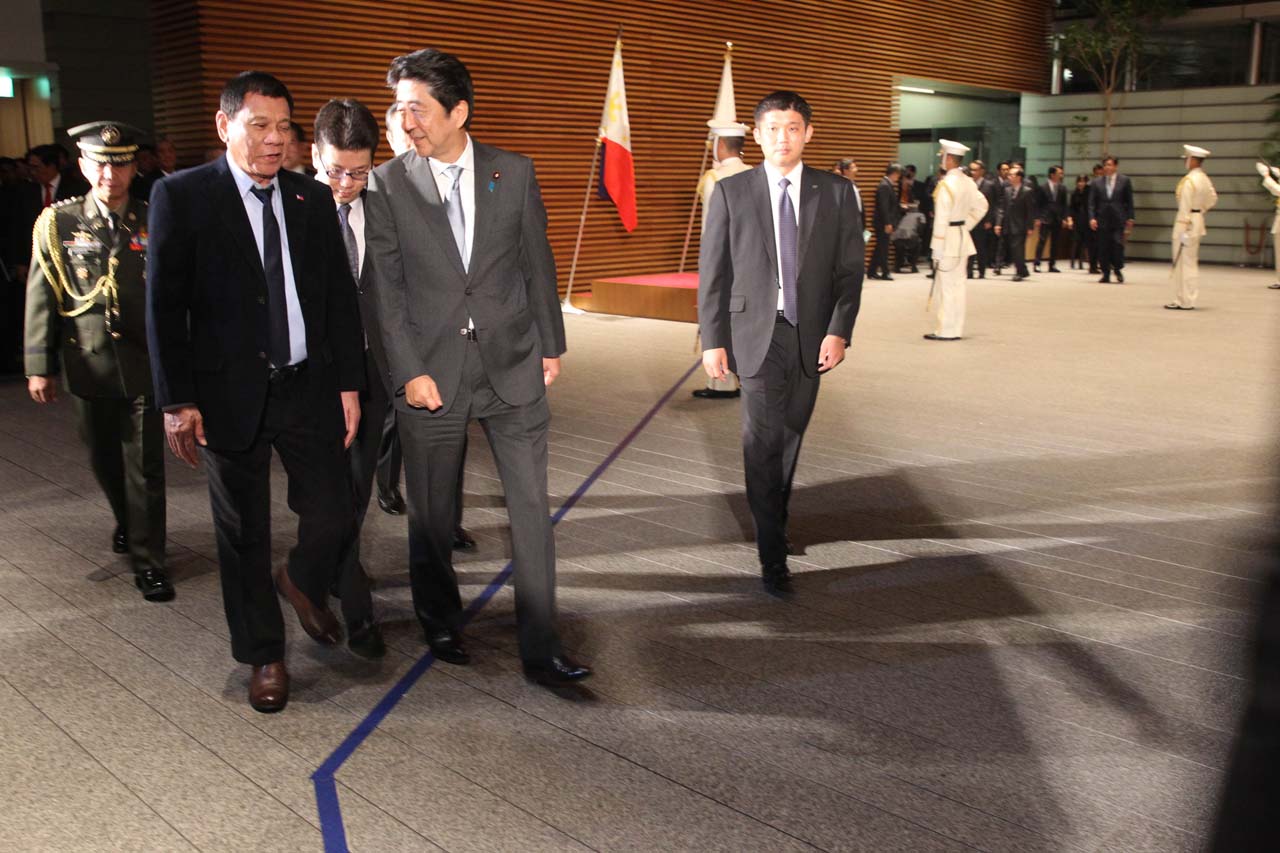 MANILA, Philippines – President Rodrigo Duterte said he is open to joint maritime exercises with Japan even as he contemplates scrapping a military deal with the United States and ending war games with the Western superpower.

Asked if Japan would be allowed to conduct joint exercises with the Philippines, Duterte said: “Yes, joint exercise? Yes, of course.”

He said this during a chance interview with media on Thursday, October 27, right after watching a capability demonstration in a headquarters of the Japanese Coast Guard.

Asked if joint exercises figured in his discussions with Japanese Prime Minister Shinzo Abe during their meeting the previous night, Duterte said, “In general terms.”

“Yes, within our territorial waters but not the sea itself. But if they want, wala namang (there’s no) problem, I do not think China would stop us, just going there and making a cruise,” said Duterte.

“As a matter of fact, I also told them they can go near my territorial waters and park there if they want,” he added, but did not clarify if he was referring to Chinese or Japanese vessels.

A Visiting Forces Agreement (VFA) with Japan was not specifically mentioned during the Philippine President’s meeting with Japanese officials.

“Specifically, no mention of a Japan agreement,” said Duterte in a mix of English and Filipino.

Duterte’s 3-day official visit to Japan has given a boost to the Philippine Coast Guard, with Japan agreeing to provide a multi-billion-peso loan and a multi-million-peso grant for large patrol ships and high-speed boats.

The President’s Japan visit came on the heels of a state visit to China, the Philippines’ nemesis in a legal battle for parts of the West Philippine Sea.

In July, an international court affirmed the Philippines’ claim on the sea. China rejects the ruling but during Duterte’s state visit, agreed to pursue bilateral talks on the maritime dispute.

During the state visit, the Philippines and China also inked an agreement for their coast guards to cooperate.

But Duterte took pains during his Japan trip to assure Abe that the Philippines has no military alliance with China. – Rappler.com