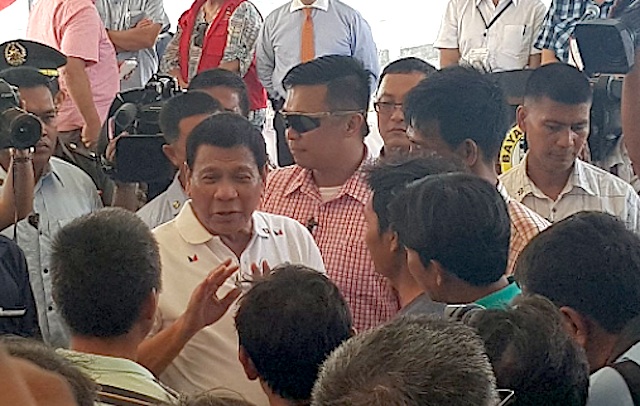 PANGASINAN, Philippines – It took President Rodrigo Duterte less than a week to break his promise to God and Filipinos that he would stop mouthing expletives in public.

The Philippine leader reverted to his old habit on Wednesday, November 2, following reports that the United States planned to stop selling assault rifles to the Philippine government.

On October 27, Duterte said in a news briefing at the Davao airport that during his plane ride to his home city from Tokyo, Japan, he promised God that he would stop cursing. (READ: Duterte heard God’s voice: Stop cursing or I’ll bring plane down)

Six days later, he changed his tune after Reuters reported that the US State Department reportedly stopped the sale of guns to the Philippines at the behest of Senator Ben Cardin. The US lawmaker was concerned that US guns might be used in the Duterte administration’s controversial war on drugs.

In his speech, Duterte downplayed the impact of the supposed plan and said that if it would be carried out, his government can turn to other countries like Russia and China.

“The Russian ambassador said, ‘You come here to Russia. We all have what you want,'” Duterte said in a mix of English and Filipino.

Chinese officials have told the Philippine leader that they are “open” to any arms purchase request by Duterte and have even given him a brochure, he said.

The President then instructed National Security Adviser Hermogenes Esperon Jr and Defense Secretary Delfin Lorenzana to scout for defense equipment from the two countries – a reiteration of a pronouncement he first made in September. (READ: Duterte: PH to buy defense assets from Russia, China)

Duterte had earlier bad-mouthed the United States and its officials led by President Barack Obama for criticizing his anti-drug efforts. He had also dared the US and another Philippine ally, the European Union – which had also expressed concern over the rise in killings in the war on drugs – to cut aid to the Philippines if they want to. – Rappler.com