Their leader, Isabelita Vinuya, gave conflicting answers that drew pointed remarks from solons as well as laughter from the audience during the House Justice Committee hearing on Del Castillo’s impeachment on Tuesday, February 14.

“Baka hindi niya alam ang kanyang pinirmahan,” Magsaysay said. (She might not have understood what she signed.)

Several times during the hearing, Magsaysay emphasized that their focus should be the alleged plagiarism, not the SC decision itself. “Hindi naman puwedeng ‘yon ang basehan natin to impeach Justice Del Castillo,” she said, referring to the SC decision penned by the beleaguered magistrate. (That cannot be our basis to impeach Justice Del Castillo.)

Later, Magsaysay asked Vinuya if she understands what impeachment means. The complainant remained silent for a while.

Vinuya then responded: ”Gusto naming ng impeachment para matugunan kami ng Kongreso at ng Senado sa aming pinaglalaban sa bansang Japan,” she said. (We want an impeachment so that Congress and then the Senate can respond to our concerns in connection with our fight in Japan.)

In contrast with her statement earlier during the hearing, Vinuya said Del Castillo must be impeached “para hindi na maulit ang nangyari” (to avoid similar instances from happening). “Dadami ang kawawa,” she said. (There will be more victims.)

Magsaysay said it is “very clear” that the Malaya Lolas do not “understand” why there are in the hearing. “They just want justice,” she said.

“Let us not use the lolas’ plight for political ends,” Magsaysay added in a mix of English and Filipino.

In an interview with Rappler after the hearing, however, Vinuya downplayed Magsaysay’s claim. 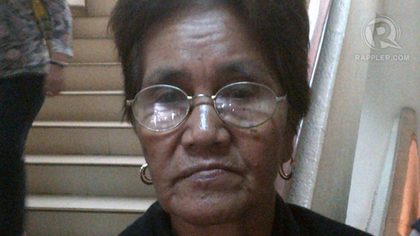 “(Itong aming paninindigan), sa aming sarili nanggagaling. Hindi kami nagpapagamit sa mga galit kay Del Castillo,” she said. (Our conviction is coming from us. We are not being used by those angry at Del Castillo.)

In another interview, 79-year-old Maria Quilantang, one of the Malaya Lolas, said Del Castillo’s impeachment is a personal battle for her. A comfort woman during World War II, Quilantang said her father among the war’s casualties.

“Tunay ko po itong karanasan kaya masakit sa aking kalooban,” she said. (This is from personal experience so it’s painful for me.)

Not the only complainants

Vinuya also clarified her statement that impeaching Del Castillo is unnecessary for them. “Kung maitutuwid lang niya itong pagkakamali,” she said. (If she can correct this injustice.)

She added that for them, the heavier offense is the SC decision and not Del Castillo’s plagiarism. But she said they also take offense at the plagiarism. “Kung ‘yun ay hindi niya binaluktot, sana hindi naibasura an gaming kaso,” Vinuya said. (If he didn’t twist that, then our case wouldn’t have been dismissed.)

Impeachment, for Vinuya, is a way for their group to receive justice in connection to World War II abuses.

In an interview with reporters after the hearing, on the other hand, House Justice Committee chair Rep Niel Tupas Jr said, “Let us not forget that the complainants here are not only the lolas but… also members of the House of Representatives.”

The hearing on Del Castillo’s impeachment will resume next Tuesday, February 21, when solons will vote on probable cause. – Rappler.com