Nov 10, 2016 8:32 PM PHT
Katerina Francisco
Facebook Twitter Copy URL
Copied
Public officials are prohibited from receiving gifts of significant value. The PNP chief has admitted that Senator Pacquiao took care of his and his family's airfare, accommodations, and even allowance. 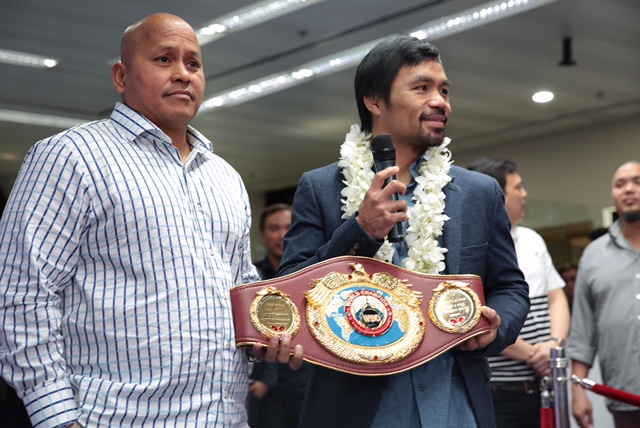 She signed a “permission” late Thursday afternoon to initiate an investigation to determine whether Dela Rosa will be liable for graft for accepting the gift from Senator Manny Pacquiao.

Dela Rosa admitted in a media interview that Pacquiao fully funded his and his family’s trip to watch the senator’s fight against boxer Jessie Vargas in Las Vegas. The PNP chief said he did not spend a single centavo of his personal funds for the trip. He also said that the airfare, tickets, hotel accommodation, and even allowance for himself and his family were paid for by Pacquiao.

Sources at the Office of the Ombudsman pointed out that it was Pacquiao who moved to declare the committee on justice and human rights, formerly headed by Senator Leila de Lima, vacant. Dela Rosa is a “person of interest” for Pacquiao, considering that the PNP chief had appeared in Senate investigations into alleged extrajudicial killings.

Pacquiao has “an ongoing transaction with Dela Rosa,” sources pointed out. The senator is a member of the Senate committees on justice and human rights and public order, the two panels which have investigated the extrajudicial killings linked to the war on drugs.

Human rights groups have raised alarm over some of these killings allegedly perpetrated by police – a claim that Dela Rosa denies. Pacquiao has also come to the defense of the police, saying the drug lords were responsible for the killings.

But the Ombudsman said Pacquiao at this point is not being considered for investigation.

Dela Rosa has brushed off criticism that his acceptance of the free trip to Las Vegas – courtesy of Pacquiao – was inappropriate.

Lawyer Arno Sanidad, a professorial lecturer at the University of the Philippines College of Law, said Dela Rosa may have violated at least two laws that prohibit public officials from accepting gifts: Presidential Decree No. 46 and Republic Act 6713, or the code of conduct for public officials.

He said the law aims to prevent the slight possibility of corruption or graft among public officials by making it punishable for them to receive or solicit gifts of value.

“The provision prohibits mainly giving ‘by reason of the office’ for present or the possibility of future favors, or even without these conditions. That is why it prohibits giving and receiving on any occasion, even Christmas,” he said.

“The spirit and purpose of the law is not to allow giving and receiving gifts at all…so as to prevent the even slight possibility of corruption or graft,” he added.

Both Pacquiao and Dela Rosa are staunch allies of President Rodrigo Duterte in his administration’s crackdown against illegal drugs.

The two Senate committees that Pacquiao is part of are also set to investigate the alleged summary execution of Albuera Mayor Rolando Espinosa Sr of Leyte in the hands of the police.

Presidential Decree No. 46 prohibits public officials from receiving gifts or any other valuable thing on any occasion when the gift is given because of an official’s position, regardless of whether or not the gift is given for past favors, or if the giver is expecting to receive a favor or better treatment in the future.

The same prohibition against receiving gifts can also be found in Republic Act 6713, which specifies that prohibited gifts include those with a value that “is neither nominal nor insignificant.”

The implementing rules of the law says: “As to what is a gift of nominal value will depend on the circumstances of each case taking into account the salary of the official or employee, the frequency or infrequency of the giving, the expectation of benefits, and other similar factors.”

A police director general – the rank of the PNP chief – currently earns only P67,500 a month.

Aside from these two laws, receiving gifts may also constitute a violation of Republic Act 3019, or the anti-graft and corrupt practices act.

As defined in the act, prohibited gifts include those with a value that is “manifestly excessive.”

RA 3019 also states that it is unlawful for any person knowingly to induce or cause a public official to commit corrupt practices.

Presidential Decree No. 46, RA 6713, and RA 3019 also state that private individuals will be held liable if they give or offer to give such presents.

“Bahala na ang propriety na iyan (I don’t care about propriety). All I know is it’s free so I grabbed the opportunity,” Dela Rosa was quoted as saying on his arrival back in Manila after watching Pacquiao’s fight in the US.

Pacquiao also saw nothing wrong in his funding the trip of some of his government friends. That’s just how Bisayas are, he said earlier.

(You know us Bisayas, it’s better for us to treat someone than to do bad things. You know, us we don’t want any illegal activities so it’s better to treat others.) – Rappler.com