Duterte: De Lima’s admission of affair not enough to implicate her 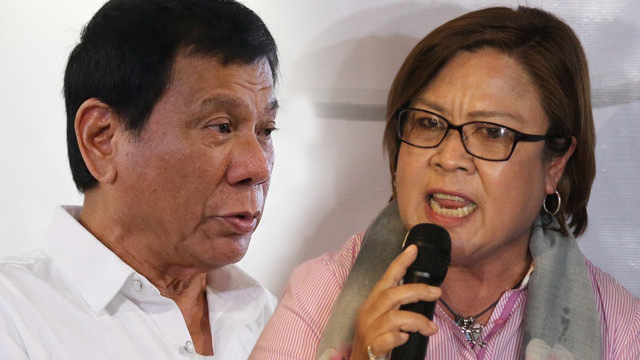 “Medyo malayo ‘yun. Malayo ‘yun because you have to prove na itong si [Ronnie Dayan]…hindi na rin makita, ‘di mo rin makuha ‘yung statement so he cannot answer for himself, he’s not around,” said Duterte on Tuesday, November 15, during a dinner with journalists.

(It’s a stretch because you have to prove that Ronnie Dayan [is involved]…[but] he cannot be found, you can’t get his statement so he cannot answer for himself, he’s not around.)

De Lima admitted in a GMA News TV interview that Dayan, then her driver and bodyguard, had been her boyfriend.

Witnesses at a congressional inquiry had tagged Dayan as De Lima’s alleged bagman in collecting drug money from convicts when she was justice secretary.

It was Duterte himself who first publicized De Lima’s relationship with Dayan during a speech last August. He had even threatened to reveal a “sex tape” of Dayan and the senator.

Duterte was the first to accuse Dayan of accepting drug money from traffickers at the New Bilibid Prison (NBP) in Muntinlupa. While he had no proof that Dayan gave the drug money to De Lima, Duterte had made his own conclusion that she accepted such money.

Duterte, on Tuesday, said he hopes Dayan will be able to testify as witness on the accusations against De Lima.

“Bakit nawala siya? (Why did he disappear?) I hope he is still alive. He is a vital witness,” said the President.

Justice Secretary Vitaliano Aguirre II said De Lima’s admission was “strong evidence” that could get her disbarred. He also said it proved that at least part of witnesses’ statements were “not manufactured.”

The Volunteers Against Crime and Corruption, the group that filed a complaint against De Lima for her alleged connection to drug syndicates, has raised P1 million as reward money for information leading to Dayan’s arrest.

Last week, the National Bureau of Investigation filed multiple charges against De Lima, Dayan, and 15 others for their alleged involvement in the drug trade at the NBP when De Lima was justice chief. – Rappler.com