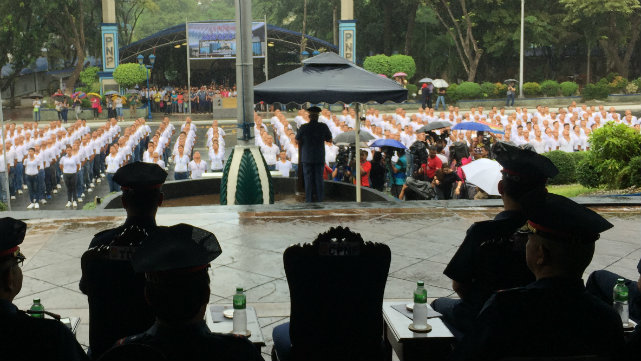 MANILA, Philippines – Amid what’s shaping up to be a year-long war on drugs, the chief of the Philippine National Police (PNP) reminded new recruits to be ready to kill or be killed in the name of service.

Rain later poured down on at least 600 new police officers in Camp Crame on Wednesday, as Dela Rosa explained he wanted them to know his “standard” of what is to be a policeman or woman.

“The question is: did you sign up to be police to make money?” he asked.

“No, sir,” the group, dressed in white shirts and blue jeans, answered.

The 600 or so cops, who were recruited mid-2016, will be assigned to various administrative and operation support units in Camp Crame such as the Health Service, the Anti-Illegal Drugs Group, and the Highway Patrol Group.

Dela Rosa told the newest members of the 160,000-strong police force: “Once you’re in the service and I retire, once I hear you’re corrupt, you’re accepting bribes or abusing your power… you will be held accountable. I’ll hold you accountable. I will hunt you down even if I’m old by then. I will take this personally because I do not want police who are corrupt, abusive, or lazy. Is that clear?”

Dela Rosa had led the PNP since July 1, or President Rodrigo Duterte’s first full day in office. He leads the police force in a popular but much-criticized war on drugs that has claimed the lives of at least 4,800 people in its first 4 months.

“So make sure if you are going to be police, you’re sincere about it. Our salaries now are bigger, you’re very lucky. So the expectations on your are higher, especially when it comes to discipline,” he added.

Ironically, Dela Rosa now is the subject of an Ombudsman probe into a free trip to Las Vegas sponsored by Senator Emmanuel Pacquiao. Dela Rosa has downplayed the investigation and defended himself from allegations of impropriety by pointing out that he was merely being transparent and honest about his trip.

In media interviews, Dela Rosa clarified that his trip to Las Vegas – to watch a Pacquiao boxing match – came at no expense. Pacquiao had apparently paid for the airfare, ticket to the match, accommodations, and even allowances of Dela Rosa and his family.

Dela Rosa has said he is “ready to go to jail” even as he insists that Pacquiao, a newly-elected senator, offered the trip with “no strings attached.”