JBC: Ready for SC even if lacking in litigation experience? 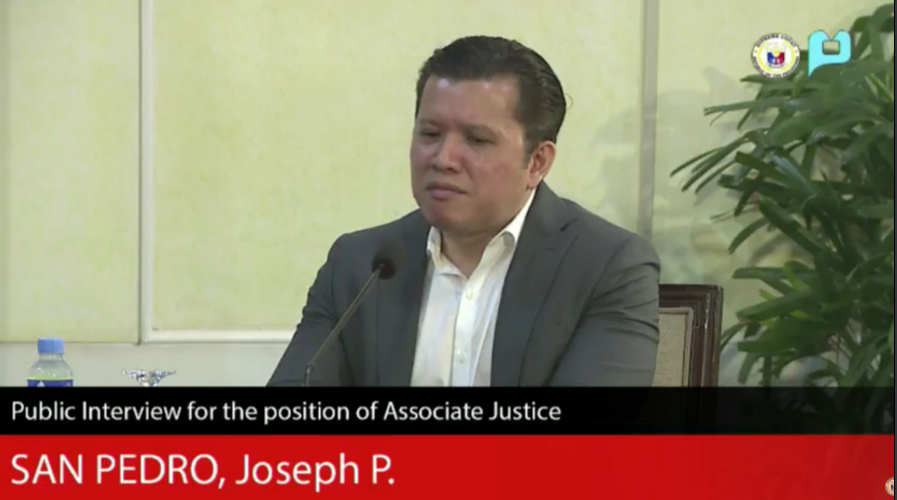 MANILA, Philippines – Lawyer Joseph San Pedro faced questions about his lack of experience in the judiciary and government as he sought to convince members of the Judicial and Bar Council (JBC) on Thursday, November 17, that he was qualified to become the next Supreme Court (SC) associate justice.

San Pedro is applying for the post soon to be vacated by retiring SC Associate Justice Arturo Brion. (READ: EXPLAINER: How the Judicial and Bar Council works)

During the public interview, JBC member Toribio Ilao Jr noted that San Pedro has neither appeared as a trial lawyer nor a litigation lawyer.

San Pedro had previously served as vice president of the Philippine Stock Exchange (PSE), heading the Market Regulation Department until his departure in 2009, reportedly due to conflict with some brokers. He had been with the PSE since May 2007.

Prior to joining the PSE, San Pedro headed the Legal Services Division of Rizal Commercial Banking Corporation and the Corporate Legal Department of Lapanday Foods Corporation. He was also partner in the law firm of Castillo Zamora & Poblador, and teaches at the Ateneo Law School.

“Having an entirely private practice, you don’t have experience at all in the judiciary, especially adjudicating cases, which is the main task of the Supreme Court,” Ilao said.

Asked if he can successfully carry out the tasks of an SC magistrate, San Pedro said he was involved in the adjudication of cases in the PSE.

“When I worked as part of the self-regulatory organization of the PSE, I did do adjudication of cases, complaints involving trading participants of the stock exchange,” he said.

San Pedro added that he handled the pleading aspect of litigation as part of a law firm.

Asked what his advantage was over other JBC applicants, and what he could bring to the High Tribunal if appointed, San Pedro mentioned his comprehensive private practice, dedication to the profession, integrity, and independence.

“You are very young, you’re only 50. When you join the Supreme Court, you will be like a monk,” she quipped.

“You have no litigation experience, but very impressive academic credentials,” she added.

Ending her questioning of San Pedro – in which she asked him about the SC ruling on Senator Juan Ponce Enrile’s bail plea and whether or not Congress can abolish the JBC – Gutierrez said, “I think you should be at least 60 before you go to the Supreme Court. You are very young.”

Earlier, JBC member Jose Mejia asked San Pedro, an educator, about his views on the quality of legal education in the Philippines.

“There is a need to impose a stricter standard on the education of lawyers. The screening process should not start only at the bar, it should start at the law school level…We should do a lot more to make sure that students have a better grasp of the workings of the law,” he said.

He was also asked about his views on the controversial SC decision dismissing petitions opposing the burial of late dictator Ferdinand Marcos at the heroes’ cemetery.

San Pedro pointed out that the dissenting opinions in the case had “compelling arguments” for a decision denying the Marcos burial.

“There were citations of certain laws, but I think the primary issue there is we have to understand the historical underpinning of our 1987 Constitution. Where did we come from? We came from the ouster of a dictator, and to allow the dictator to be buried and given some kind of honor will be a disrespect and dishonor to the people who made sacrifices to have our democracy right now,” he said. – Rappler.com