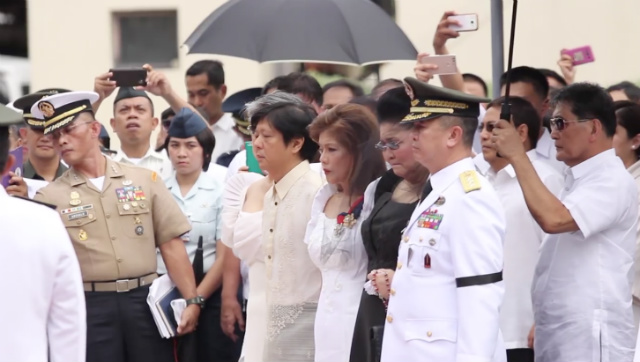 MANILA, Philippines – This is how a hero is buried.

Kept from the eyes of the public, the hero’s burial of the late dictator Ferdinand Marcos was captured in a “same-day edit” video posted by his daughter, Ilocos Norte Governor Imee Marcos.

Governor Marcos posted the video on Friday, November 18, with the hashtag #SalamatAPO.

“Apo” is an expression of reverence in Ilocos, the birthplace and bailiwick of Marcos.

The video has had half a million views as of 2:30 pm on Friday, when Marcos was buried with full military honors at the Libingan ng mga Bayani (Heroes’ Cemetery).

The public learned about his scheduled burial only around an hour before it took place – a private burial as requested by the Marcos family. Vice President Leni Robredo said Marcos was buried “like a thief in the night.”

In the video posted by Governor Marcos, the opening shot showed a helicopter presumably bringing the late dictator’s remains to the Libingan ng mga Bayani.

The next shot showed soldiers carrying the casket of Marcos.

Mrs Marcos, who was wearing black, is seen holding a rosary.

Governor Marcos – who, according to President Rodrigo Duterte, supported his presidential bid – is seen smiling.

It was Duterte who approved a hero’s burial for Marcos 30 years after Filipinos ousted the dictator. – Rappler.com