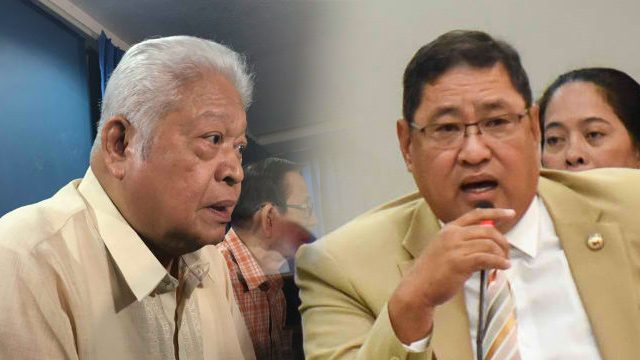 Facebook Twitter Copy URL
Copied
House justice committee chairperson Reynaldo Umali defends the move: 'We have not had any death penalty for some time. And what has happened? Things became worse.'

MANILA, Philippines – Members of the House of Representatives’ independent minority bloc on Tuesday, November 22, accused the House justice committee of “railroading” the passage of the bills seeking to reimpose the death penalty.

Albay 1st District Representative Edcel Lagman, part of the “Magnificent 7” in the opposition, said he had an informal meeting with House justice committee chairperson Reynaldo Umali and the panel vice chairpersons on Monda.

Umali, he said, reportedly mulled reimposing the death penalty only for drug-related cases instead of all other heinous crimes.

“There’s a railroading on the proposed bills reimposing the death penalty. Today, the committee on justice set a whole day meeting and again, tomorrow, it’s a full day meeting. Prior to that, there was another meeting. That would only show to you how they would like to railroad the passage of this bill in the subcommitte level, and the same strategy will hold true in the committee level then plenary,” Lagman said in a press conference on Tuesday.

According to Lagman, Umali’s proposal was a “way of hastening passage of the bill because some might agree to just limit it to drug-related cases.”

The lawmaker, however, said he would fight to stop the passage of the bills.

“There should be no reimposition of the death penalty because it is against human rights and it’s not a deterrent to crime,” Lagman said.

“This is a way of somehow validating the extrajudicial killing…. ‘Pag nga naman ma-reimpose ang death penalty kahit sa drug-related cases lamang, sasabihin nila, eh Kongreso ang sumang-ayon eh (If the death penalty is reimposed even for drug-related cases only, they’ll say it was because Congress agreed). So this is a way of validating or synthesizing the ongoing extrajudicial killings that is being reported to the media,” said Daza.

But Lagman said at least 14 congressmen who were also part of the 13th Congress and who had opposed the death penalty then are planning to do the same during the 17th Congress. He added that another 26 representatives who are related to the said 14 lawmakers plan to vote against the death penalty as well.

“We will have to keep it close to our chests. We don’t want to unduly alarm the leadership of the super majority…. We have significant numbers,” said Lagman.

Umali denied that his proposal was a way of fast-tracking the legislative process so his committee can meet the Speaker’s deadline.

“Not really. It’s just a pragmatic way of trying to introduce change in what we do. We have not had any death penalty for some time. And what has happened? Things became worse. So if we will maintain that status quo, what will happen? What do you expect? Do you think things will change? It might even worsen,” said Umali.

He noted that reimposing the death penalty for drug-related cases was among the recommendations his committee made after wrapping their probe on the narcotics trade inside the New Bilibid Prison.

(We felt it was necessary that we do it soonest because Jaybee Sebastian was asked, “What are you afraid of?” He said, “Just death.” So now they are not afraid because there is no death penalty.)

Umali clarified that he is personally against the death penalty, but the state of the criminal justice system in the country is forcing him to think of other ways to address the problem.