Nov 29, 2016 2:43 PM PHT
Rappler.com
Facebook Twitter Copy URL
Copied
(4th UPDATE) '[The Marcos burial] denies our history, erases the memory of lives lost and destroyed, mocks the collective action we took to oust the dictator, and denigrates the value of our struggle for freedom' 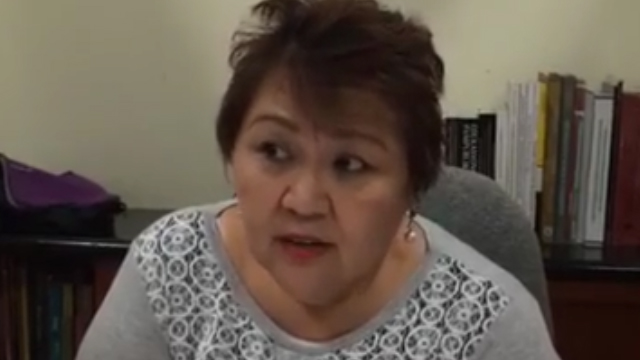 In her resignation letter, Diokno condemned Marcos’ burial and vowed to continue opposing it.

“The burial of Ferdinand Marcos in the Libingan ng mga Bayani is wrong; it denies our history, erases the memory of lives lost and destroyed, mocks the collective action we took to oust the dictator, and denigrates the value of our struggle for freedom,” she said.

Diokno also slammed President Rodrigo Duterte, who ordered Marcos’ burial, and the Supreme Court, which voted 9-5 in favor of the interment after petitions were filed to challenge Duterte’s order.

“At this moment in our history, every voice counts, and I wish to place mine on the side of history: not the history that the Duterte government ignores, but the history that beckons our people to demand justice that even the highest court of the land will not bestow,” Diokno said.

“Notwithstanding the narrow view adopted by 9 members of the Supreme Court, President Duterte could have taken the higher ground. But he chose not to. Worse, he justifies his ‘legalistic’ action by claiming, falsely, that ‘there’s no study, no movie about it [Marcos’s record as a leader], just the challenges and allegations of the other side.'”

Duterte has repeatedly said that Marcos deserves to be buried at the Libingan ng mga Bayani because he was a former president and soldier. (READ: Duterte on Marcos burial: Let history judge, I followed law)

The NHCP under Diokno’s leadership, however, previously expressed its opposition to the burial.

The commission released a study disputing the late strongman’s supposed record a a soldier during the World War II, which it said is “fraught with myths, factual inconsistencies, and lies.”

The NHCP pointed out that Marcos “lied about receiving the Distinguished Service Cross, Silver Star, and Order of the Purple Heart”, a claim he supposedly made as early as 1945.

In a recent Rappler interview, Diokno stressed the impact of burying the former dictator at the cemetery that is supposed to be the final resting place for heroes.

“How do you explain to young people, to students [that] well, you know, there were so many questions – in fact, he lied about the medals – but, anyway, he belongs to the cemetery of heroes. There seems to be an incongruence there,” Diokno said in an interview last August.

For Diokno, though, there is a ray of hope – the thousands of students who have taken to the streets and social media to express outrage over Marcos’ burial. (READ: Students told after Marcos burial: ‘Bigger lessons outside classroom’)

“For a moment I thought I could remain at the National Historical Commission of the Philippines and protect our history from those in and out of government who attempt to deface it,” she said in her resignation letter.

“But the multitude of especially young Filipinos who have come out in defense of history and are prepared to co-author it for their generation and the future point to one clear realization: they, we all, will guard our history.” (READ: #ThankYouStScho: ‘Please do not underestimate the youth’)

Diokno said she would join the anti-Marcos protest at the People Power Monument set for Wednesday, November 30. (READ: Schedule: November 30 rallies vs Marcos)

“Tomorrow I will join the popular assertion of our history and look forward to more in as many public venues as possible,” she said. “Never again will we allow any remnant of the authoritarian past to take hold of our country.”

The NHCP head is the daughter of Filipino nationalist and late senator Jose “Ka Pepe” Diokno, who staunchly opposed the Marcos dictatorship. “Ka Pepe” was detained together with the late senator Benigno Aquino Jr in Fort Bonifacio for their hardline stance against the Marcos regime.

In a statement, Presidential Spokesperson Ernesto Abella said: “We respect Chair Diokno’s decision and we thank her for the services she rendered to the nation as she headed the commission responsible for the conservation and preservation of the country’s historical legacies.”

Abella added that Duterte has already stated his positon on the hero’s burial for Marcos – that “the Supreme Court has ruled and that he respects and abides by the decision of the High Court.”

Aside from Diokno, NHCP Commissioner Francis Gealogo also announced on Tuesday that he had resigned over Marcos’ burial. Gealogo posted a photo of his resignation letter, dated November 19 and addressed to the President, on Facebook.

“I believe that the Commission’s stand opposing the burial of Ferdinand E. Marcos Sr at the Libingan ng mga Bayani is based on solid historical research and is made as part of the mandate of the Commission to clarify issues pertinent to historical questions that confront our society,” Gealogo said in his letter.

“I stand by the historical truth of the fact that the martyrs and victims of martial law should be the ones that we ought to recognize as the true heroes of our nation, and not the dictator who caused untold miseries and sufferings to our people.” – with reports from Patty Pasion / Rappler.com