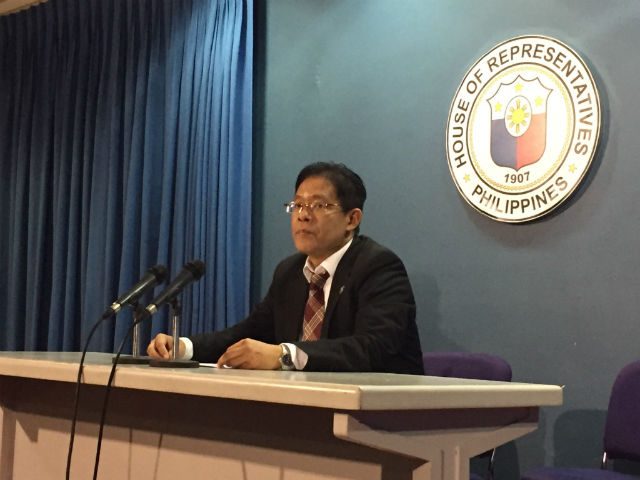 Facebook Twitter Copy URL
Copied
Representative Salvador Belaro Jr says that for reporting on his sexually-laden questions to a witness, Rappler can be considered among the forces that distract the public from the bigger 'national interest' that is the war on illegal drugs

MANILA, Philippines – 1-Ang Edukasyon Representative Salvador Belaro Jr hit those who continue to criticize him despite his public apology over his “climax” question to Ronnie Dayan during the House hearing on the illegal drug trade at the New Bilibid Prison (NBP).

In a press conference on Tuesday, November 29, Belaro said there are “certain interest groups right now who are trying to peddle to the public a distorted sense of nationalism.”

These forces, he said, “only concentrate on minor aspects of this controversy,” thus distracting the public from the bigger “national interest” that is the war on illegal drugs.

“Now the problem with these charlatans in some organized media – not everybody of course because we have so many friends in media also – and also some rabble rousers who tend to preach dogma to the Philippine people is that they think we should only concentrate on minor aspects of this controversy rather than focus on the national interest involved. They are clouding the issue,” Belaro said.

On Monday, Belaro said in a privilege speech that Rappler took him out of context when his questions to Dayan, Senator Leila de Lima’s ex-security aide and lover accused as her bagman, were included in the story, “Kailan kayo nag-climax?’: Nonsense questions at the Bilibid drugs hearing.”

In the story, Rappler listed the questions that several lawmakers asked but which the hearing on Bilibid drugs could have done without.

During the hearing on November 24, Belaro had asked Dayan questions like “Mahilig ka ba sa sili? (Are you fond of chili pepper?)” and “Palakas nang palakas hanggang intensity 5. Kailan kayo nag-climax? (When did you climax?)” to establish how deep Dayan’s relationship was with De Lima, former justice secretary. (READ: Lawmakers feast on De Lima-Dayan love affair)

Asked if he was referring to Rappler as among those who supposedly peddled a “distorted sense of nationalism,” Belaro said yes, if applied to the article in question.

“When I said distorted sense of nationalism, I’m referring to those interest groups in general. I’m not singling out Rappler. If they do qualify in the parameters I just mentioned, then they are qualified under it,” he added.

“But you know, these ideas are only manifesting in actions and if I may cite Rappler on that particular instance, they qualify at least for this issue,” he added.

Belaro received criticism that some of the questions he asked during the House justice committee hearig were misogynistic.

While the lawmaker already apologized for his “climax” question to Dayan, he also believes that the Rappler mood meter – which allows readers to click on an emotion a particular story made them feel – merits a congressional investigation.

Speaker Pantaleon Alvarez himself said queries on the De Lima-Dayan affair were necessary to establish their true relationship and to test Dayan’s credibility.

Alvarez, however, also “sincerely” apologized for the “inappropriate” questions of some of the justice panel members to Dayan. – Rappler.com