Protesters to Duterte, Marcoses: ‘This is what democracy looks like’ MANILA, Philippines (UPDATED) – “Show me how democracy looks like!”

Thousands of protesters chanted this as they gathered at the People Power Monument on EDSA on Wednesday, November 30, for another grand rally to oppose the hero’s burial that the Duterte administration gave to dictator Ferdinand Marcos.

It was the second big rally organized in Metro Manila, with simultaneous mobilizations in key cities across the country, after the surreptitious interment of Marcos’ remains at the Libingan ng mga Bayani (LNMB). The first one, on November 25 at the Luneta in Manila, drew up to 8,000 demonstrators who called on President Rodrigo Duterte to end his alliance with the Marcos family. 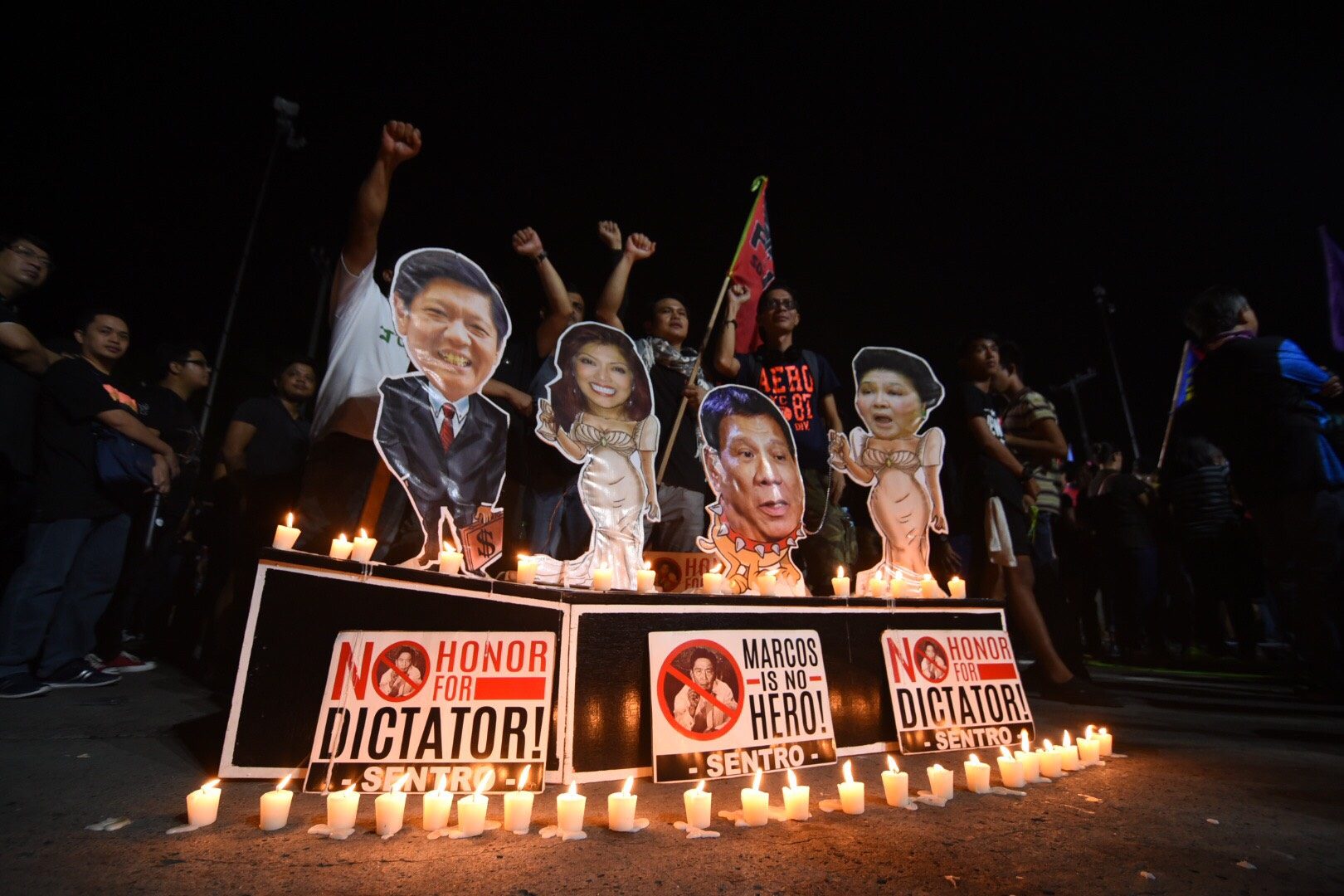 On Wednesday, as early as 3 pm – before the program started – over 100 people from different groups and schools went to the shrine that immortalizes the 1986 EDSA People Power Revolution. That uprising toppled Ferdinand Marcos and sent his family to exile in Hawaii.

At 6 pm, the protesters, led by the UP Kontra Gapi, held a noise barrage. For less than 5 minutes, they pounded on drums, smashed the sticks that held their placards, and shouted anti-Marcos slogans. The groups iDefend and Block Marcos, whose members also attended the rally, staged their own noise barrage in pocket protests elsewhere earlier in the day.

By evening, the crowd had reached about 15,000. They planned to stay until midnight.

The groups that participated in the rally organized by the Coalition Against Marcos Burial at the Libingan ng mga Bayani (CAMB-LNMB) included iDefend, Block Marcos, Freedom from Debt Coalition, Sentro, and even religious organizations.

As in the November 25 rally by the Campaign Against the Return of the Marcoses in Malacañang (Carmma), the EDSA protest rally was attended largely by millennials. They were represented by students from different universities, led by the University of the Philippines, Ateneo de Manila University, De La Salle University, and University of Santo Tomas. Several prominent personalities, including politicians and musicians, joined the rally. Among them was Maria Serena Diokno, who had just resigned as chairperson of the National Historical Commission of the Philippines over Marcos’ burial at the Heroes’ Cemetery.

Diokno, daughter of the late staunch anti-dictatorship Senator Jose “Pepe” Diokno, said her fellow historians wanted her to stay in her position since they do not know who will be appointed by the administration. She, however, said she would be passing the torch to the young people.

“I [was inspired by] what you, the young ones, are doing. In everything you say, you chant, you always call on us that we should not forget our history. That’s what fills my heart. Let us not forget history because that’s what we are,” she told the protesters in Filipino.

“A society that does not study or know its history crumbles,” Diokno added.

Boni Ilagan, convenor of the Carmma network that organized the November 25 rally, also spoke onstage to show unity with CAMB-LNMB, organizer of Wednesday’s gathering. Before the two grand rallies, it was reported that the two camps were not working together despite their common anti-Marcos agenda. Organizers of the EDSA rally maintained their call to exhume the former dictator’s remains from the Libingan ng mga Bayani. They wanted Duterte to order the removal of Marcos’ remains.

Former Akbayan Representative Barry Gutierrez, legal counsel of one of the petitioners against the burial, said the protests were not just about the cases filed with the Supreme Court (SC) but President Duterte’s responsibility. (READ: November 30 rallies: What protesters demand of Duterte)

“The SC did not say that he should be buried. What the SC said is, if the President wants to bury him, then he could. That’s why they are addressing the responsibility to the President, that he does not owe anything to the Marcoses to allow it,” said Gutierrez.

Zenaida Mique of CAMB-LNMB said that, for now, they are pinning their hopes on how the Supreme Court will rule on the motions for reconsideration that petitioners filed. 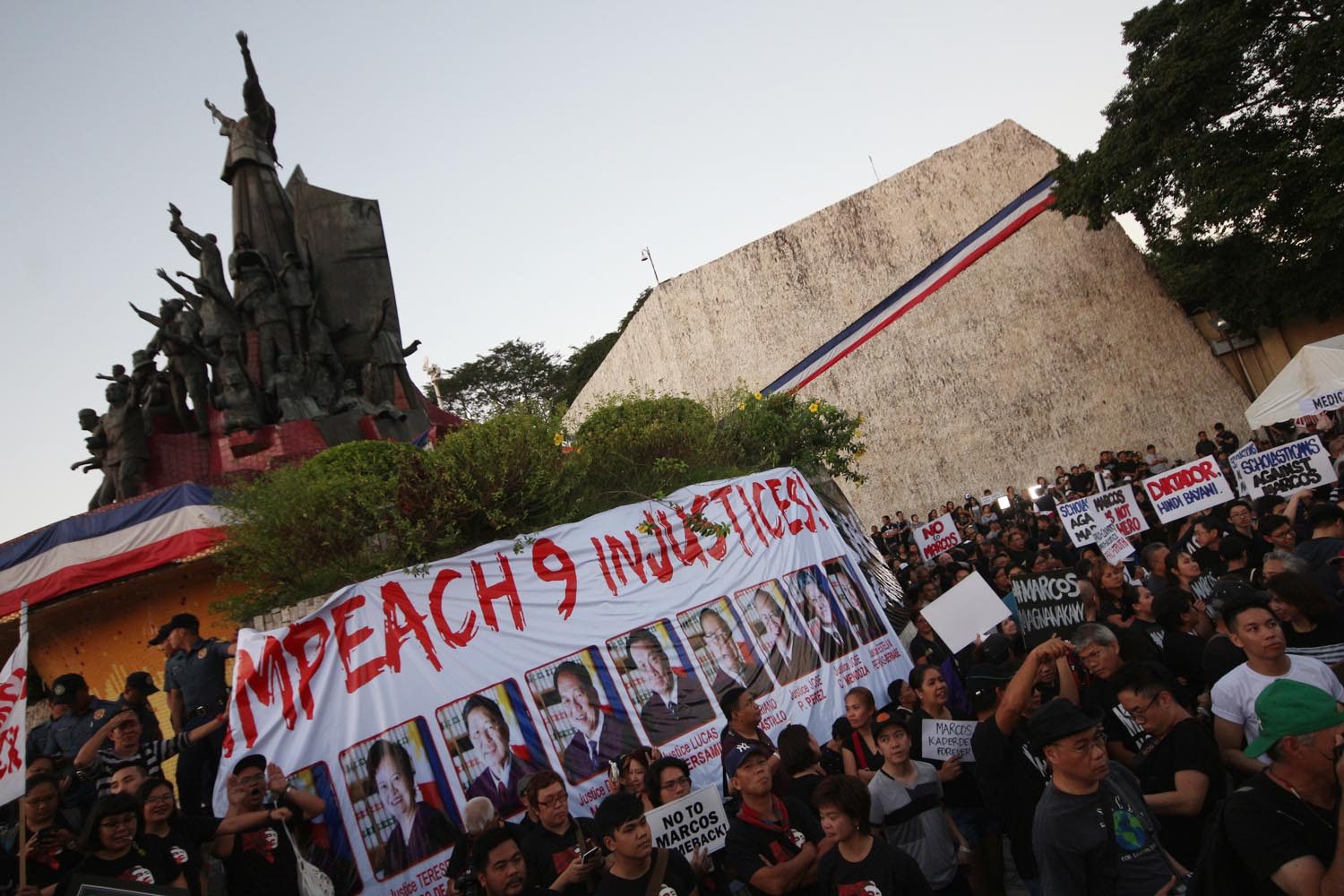 As of Tuesday, 3 appeals had been filed with High Court, asking it to reverse its ruling that allowed Duterte to go ahead with giving Marcos a hero’s burial: by former Bayan Muna congressman Satur Ocampo and by Albay Representative Edcel Lagman, and by Senator Leila de Lima.

The SC earlier denied the petitions seeking to block a hero’s burial for the dictator, arguing that there is no law explicitly prohibiting it.

Aside from the motions for reconsideration, petitioners asked the SC to cite the Marcos family and the Armed Forces of the Philippines in contempt for executing a decision that was not yet final. Marcos was buried in a ceremony intended to be secret just 10 days after the SC ruling. It fell within the 15-day period when the petitioners were allowed to file their appeals.

Given the 9-5 vote of the SC, which court observers say makes it unlikely to be reversed, Mique said a massive clamor from the people will be all the more crucial to send the message to the justices. “We think it now depends on the huge protests of the people. If the 9 magistrates will see the wide indignation against what the Marcoses did, the decision may be overturned,” she said.

She is also hopeful that the justices will reassess their interpretation of the laws after framers of the 1987 Constitution themselves condemned the hero’s burial for Marcos. – Rappler.com