‘Quietano?’ Alan says not his job to protest, be a ‘fiscalizer’ 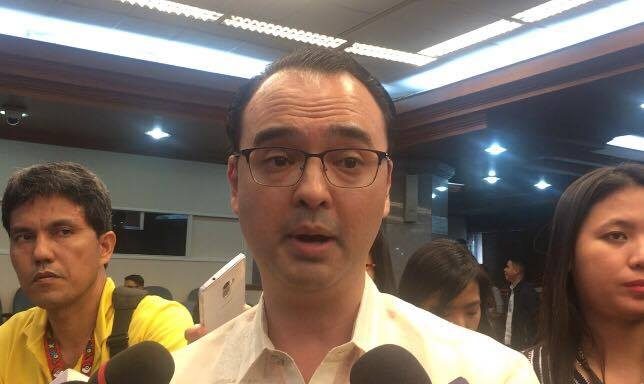 MANILA, Philippines – Senator Alan Peter Cayetano defended his silence on the hero’s burial of the late dictator Ferdinand Marcos – an issue he has strongly opposed until recently.

Cayetano said it is enough that President Rodrigo Duterte already knows about his opposition. It is not his job to voice out his opinions on the streets, said the staunch Duterte supporter.

“Right now my job is both foreign relations and troubleshooting for some of the intentions ng Palasyo. So it is not my job right now to keep voicing out my opinions sa kalye (in the streets). My job is to be ready when the President asks me to do something, my advice,” Cayetano said, referring to the protests against Marcos’ burial at the Libingan ng mga Bayani.

The senator has long opposed Duterte’s plan to grant a hero’s burial to the former president. But in the aftermath of the apparent “secret” event, Cayetano kept silent, prompting netizens to give him the monicker “Quietano”.

He explained it is not his “role” to be a fiscalizer in the present government. The senator, however, was a known vocal critic of former president Gloria Arroyo, now an ally of Duterte.

“As for me, it is not my role now to be a fiscalizer. Role ko (My role) is to tell the President my opinion, for the campaign promises to be kept, and to help the President any way I can,” he said in a mix of Filipino and English.

Cayetano also expressed doubt that the burial of Marcos is the most important issue for Filipinos, saying it’s just the media making it so.

“I disagree. There are so many things important in our country. The reality is may favorite topics din ang mga media. (The reality is the media also have favorite topics.)  I’ve seen latest surveys. A lot of people care about the issue, but they care more about presyo, trabaho, kita, kaayusan, (prices, livelihood, order) public order,” he said.

Cayetano ran against former senator Ferdinand Marcos Jr, whom he lambasted during the vice presidential debates in the 2016 campaign for the family’s ill-gotten wealth and his father’s imposition of Martial Law. – Rappler.com