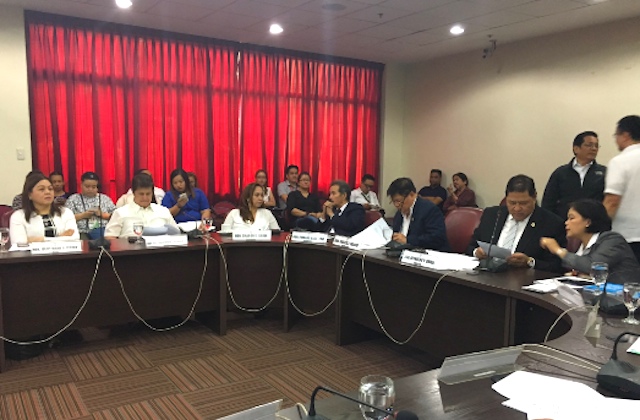 Voting 12-6-1, the panel approved the committee report on House Bill Number 1, which seeks to reinstate capital punishment for all heinous crimes, including the following:

HB 1 outlines specific conditions on how these crimes were committed for a violator to be meted the death penalty. The measure also provides 3 methods to carry out the death penalty: by hanging, firing squad, or lethal injection. (READ: House death penalty bill: How they voted)

Speaker Pantaleon Alvarez, one of the co-authors of the bill, is hoping that HB 1 would be passed on 3rd and final reading before Congress goes on Christmas break next week.

The measure is also one of the priority bills of President Rodrigo Duterte, who counts more than 250 congressmen as his allies.

“What the substitute bill says, in our penal system, especially the Revised Penal Code, the maximum penalty there is life imprisonment. The problem really is we have a guy who keeps on raping, kidnapping for ransom people repeatedly, he commits the same offenses,” Veloso said at the committee meeting.

“If in front of you is Satan, what can courts do? None, because the maximum penalty provided for in our penal system is life imprisonment. Kung ang nasa harapan mo ay si Satanas na mismo, oh my God! Bigyan mo naman ang gobyerno ng option para patayin na ‘yan. Satanas na ‘yan ah (If the person in front of you is Satan himself, oh my God! Give the government the option to kill him. That is Satan already)!”

Majority Leader Rodolfo Fariñas also reasoned that the 1987 Constitution allows the death penalty to be implemented if Congress finds compelling reasons to do so.

Section 19, Article III reads: “Excessive fines shall not be imposed, nor cruel, degrading or inhuman punishment inflicted. Neither shall death penalty be imposed, unless, for compelling reasons involving heinous crimes, the Congress hereafter provides for it. Any death penalty already imposed shall be reduced to reclusion perpetua.”

Fariñas said there would no discussions on the reimposition of the death penalty now, had the framers of the Constitution completely removed the particular provision.

(They did put there that it should not be imposed, but they still placed it there and said it can be implemented if Congress sees fit to return it. We can’t say that is against God. Why is it in the Constitution then? That would mean our Constitution is against God!)

Oriental Mindoro 2nd District Representative Reynaldo Umali, committee chairperson, added that restoring capital punishment in the country would help bring back Filipinos’ trust in the justice system. As of December 3, there have been over 5,800 drug-related deaths, both from legitimate police operations and vigilante-style or unexplained killings.

Death penalty will ‘hurt the state’

(I don’t think you can compare EJKs and the death penalty. They belong to different categories and classifications. What is the basis of the comparison? We want to end these EJKs, but we can’t solve it by saying, “Okay, death penalty.” That’s not how it works.)

“In fact, statistics would show that crime rate decreased after the death penalty law was repealed in 2006.  Only 13% [or] 474 of the documented 3,524 reports on extrajudicial, vigilante-style, unexplained killings are arrested. The other 87% are still at large or under investigation. The real issue is not the imposition of the death penalty but the assurance to the public that offenders will be apprehended regardless of the nature of the penalty,” added Bag-ao.

Quezon City 6th District Representative Jose Christopher Belmonte acknowledged that should a heinous crime be committed against someone close to him, he would not be able to stop himself from considering killing the perpetrator.

But he said doing so would only make things worse.

(If that happens to my child or someone close to me, most likely I’d want to do it and I would do it. The option is there already. And I think you can’t take this away from anyone.)

Minority lawmakers had previously accused the House leadership of “railroading” the passage of the bill into law to meet Alvarez’s deadline, but the Speaker denied this, citing public consultations with various sectors to get their stand on the proposal.

The Catholic Church, human rights groups, and some lawmakers have objected to the reimposition of capital punishment in the country, saying it is not a deterrent to crime. (READ: Lawmakers urged to reject revival of death penalty and A lethal mix: Death penalty and a ‘flawed,’ corrupt justice system)

Amnesty International had earlier expressed concern over the move to restore the death penalty in the Philippines shortly after it became clear that Duterte had won the presidency. (READ: A shame for PH if death penalty is restored)

Lingayen-Dagupan Archbishop Socrates Villegas had called for a prayer rally against the proposed measure in his archdiocese on December 12.

Alvarez, however, advised Filipino Catholics to look for a new religion should they be ostracized for supporting the reinstatement of capital punishment in the country.

Capital punishment was eventually abolished in 2006, under the presidency of Gloria Macapagal-Arroyo. Now a Pampanga Representative, Arroyo is still against the reimposition of the death penalty. – Rappler.com