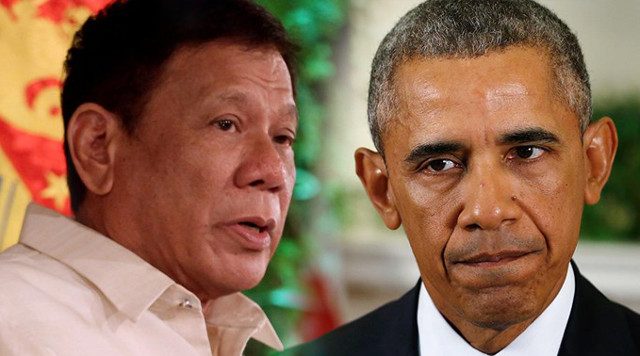 Facebook Twitter Copy URL
Copied
'I did not have a bum stomach; do not believe it. That was just an excuse,' says President Rodrigo Duterte, who had been criticized for missing key events in his first APEC meeting

MANILA, Philippines – President Rodrigo Duterte revealed Monday night, December 12, that he intentionally skipped the Asia-Pacific Economic Cooperation (APEC) Leaders’ Meeting and other key events in Peru to avoid what he feared to be an “awkward situation” with US President Barack Obama.

At a Peter Wallace Business Forum in Malacañang, Duterte admitted that having a bum stomach was just an excuse for his absence in major events at his first APEC meeting.

The President said he planned to either make a friendly gesture to Obama by shaking his hand or to avoid him altogether, when they met again in Lima in November. They first met at the Association of Southeast Asian Nations (ASEAN) Summit and Related Summits in Laos in September, where he lambasted the US leader.

“I would not know if he would accept my gesture of a handshake or me deliberately getting out of the way to avoid him. And you can tell it just by looking at the body language of people. You would know, and because I did not want to create a scene, an awkward situation, I just stayed [on] the sidelines,” the President explained on Monday.

To avoid Obama, Duterte missed several important events including the gala dinner hosted by Peruvian President Pedro Pablo Kucynzski, the Leaders’ Retreat, and the traditional “family photo” of APEC leaders. In all events, he was represented by Foreign Secretary Perfecto Yasay Jr. (READ: Duterte’s absences in summits: What we’re missing)

Duterte himself had earlier confirmed the bum stomach excuse given by his spokesmen. Responding to reporters’ queries at the Wireless Cemetery in Davao City on November 24, the President said, “My stomach was not good and I could have exploded anytime.”

On Monday, he told reporters not to believe the earlier excuse. “I did not have a bum stomach; do not believe it. That was just an excuse. But really – I would not know how to react if he (Obama) would just push my hand.”

He said interacting with Obama would have been awkward because of their “very hot exchange” of words.

Obama and the US State Department had expressed concern over possible human rights violations in Duterte’s anti-illegal drugs campaign.

Duterte bristled at this, claiming Obama and the US were “lecturing” him. He also told Obama to “go to hell,” and called out the US for committing atrocities in its pacification campaign in Mindanao when the Philippines was its colony.

Duterte seems to be getting along better with Obama’s successor, US President-elect Donald Trump, who told him he was doing well in his fight against drugs. – Rappler.com