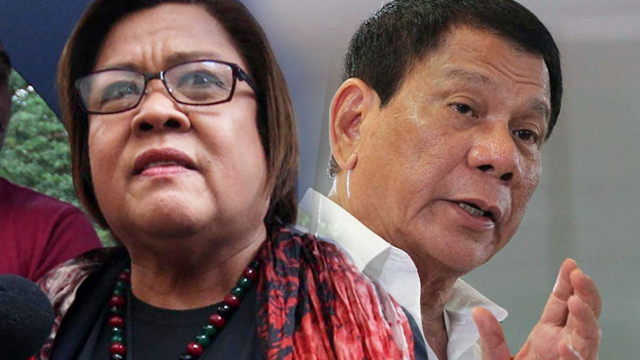 This was what Senator Leila de Lima, the President’s fiercest critic, told the international community on Monday, December 19, at the Annual Conference on Cultural Diplomacy in Berlin, Germany.

“In May of this year, 16 million Filipinos elected a self-confessed serial killer as President,” De Lima said, adding that 2016 is a year of “interesting events.”

Her remarks came amid a new Social Weather Stations survey showing almost 8 out of 10 Filipinos are worried they would be killed in the Duterte administration’s war on drugs.

De Lima also told the forum that Duterte, during the campaign, made a rape joke about an Australian missionary who was raped and killed in Davao City, that the President cursed Pope Francis for having caused traffic jams during his Manila visit, that he evaded questions about the source of his alleged hidden wealth, and that he promised to end crime through summary executions.

The President earlier admitted killing drug suspects and alleged criminals when he was still mayor of Davao City. He has also repeatedly told the police that they should shoot suspects who resist arrest.

It was De Lima who first launched a Senate probe into the spate of extrajudicial killings under the administration and Duterte’s alleged role in the summary executions.

The Senate panel, however, cleared Duterte of any liability and said there is no proof of the existence of the vigilante group Davao Death Squad, which was supposedly backed by Duterte.

De Lima, before the international audience, also raised the possibility of another dictatorship in the Philippines under Duterte.

Citing the burial of the late dictator Ferdinand Marcos at the Libingan ng mga Bayani, De Lima said Duterte “obscured the rejection of such regime by allowing a plunderer and a killer to be given a hero’s burial.”

The senator also slammed the Duterte administration for dangling the idea of martial law and the suspension of the writ of habeas corpus – or warrantless arrests – to end terrorism and crime.

“He and his men [are] preying on the people’s fears from so-called anticipated reprisals by those involved in the drug trade, or from terrorist attacks, or some other undefined threats that prey upon their feelings of insecurity,” De Lima said.

“[They] are keeping the threat of a declaration of a state of national emergency, martial law, and suspension of the writ of habeas corpus perpetually hanging above the Filipinos’ heads, thus priming them for malleability for other extreme actions,” the senator added.

De Lima also said at the conference that the Philippines is being thrown “several decades back” with the President’s misogyny.

Duterte does this, she said, “by himself creating a culture of misogyny wherein female members of the press are catcalled during press conferences, female police officers are touched inappropriately, the Vice President’s legs are openly ogled during Cabinet meetings, and slut-shaming is employed as a form of political reprisal against women who dare criticize him.”

Before this forum in Germany, De Lima went to the United States to receive a recognition from the 46-year-old Foreign Policy magazine. She is set to return to the country on Tuesday, December 20.

De Lima is facing multiple drug charges before the Department of Justice and the Ombudsman, a disbarment case before the Supreme Court, and 3 ethics complaints before the Senate. – Rappler.com