Facebook Twitter Copy URL
Copied
(UPDATED) In June, President Duterte had a rating of 79%. This dropped to 72% in December – still excellent, says SWS.

MANILA, Philippines (UPDATED) – President Rodrigo Duterte still enjoys “excellent” trust from the public but with a decline in his numbers nationwide from the time he won as president in June.

With just 6 months in office, Duterte’s net trust ratings dipped by 4 percentage points – from 76% in September down to 72% in December. In June, Duterte had an “excellent” rating of 79% days before his inauguration.

First published in BusinessWorld on Thursday, December 22, the SWS survey said 81% of respondents had “much trust” in Duterte while 9% had “little trust” in him, generating a net score of 72%.

The SWS attributed the 4-point dip to the drop of scores in Metro Manila, Mindanao, and the Visayas, which leveled the “steady score” in the remainder of Luzon. In Metro Manila, trust in the President dropped by 11 points – from an “excellent” score of 76% in September down to a “very good” rating of 65% in December.

In Mindanao, Duterte’s home region, his trust ratings stayed “excellent” but dropped 7 points – from 92% in September to 85%.

The poll, conducted from December 3 to 6, among 1,500 respondents nationwide, had a +/-3 margin of error for the whole country and +/-4 for Balance Luzon, and +/-6 points for Metro Manila, the Visayas, and Mindanao. Among socioeconomic classes, the President’s score was excellent in classes D and E.

Fewer Class ABC respondents said they trust Duterte now than in September, with a decline of 13 percentage points – from an excellent 72% down to a “very good” 59%. 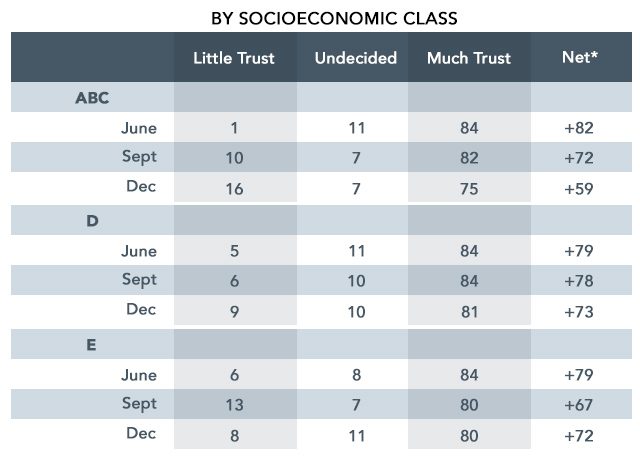 Malacañang, meanwhile, said that the survey results is a “testament that our people continue to stand shoulder-to-shoulder with the President’s agenda of getting rid the society of illegal drugs, crime, and corruption.”

“This gives him and members of his team to pursue with greater resolve the administration’s goal of a Philippines free from the drug scourge, crime incidents, and malfeasance in public service,” the Palace said in a statement to media.

Earlier, the SWS released survey results showing most of its respondents – 78% –  were worried they could be the next victims of extrajudicial killings (45% “very worried,” 33% “somewhat worried”).