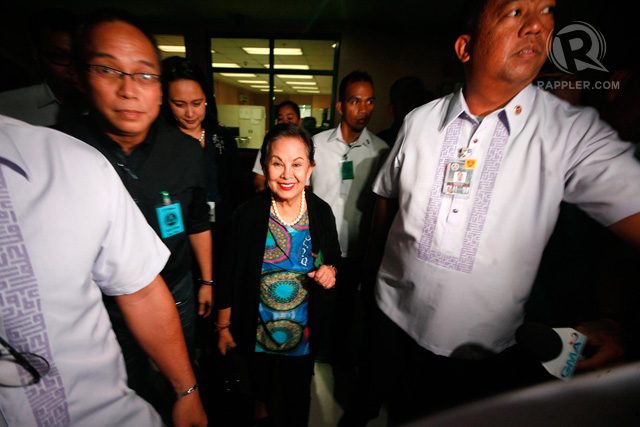 This was according to the anti-graft court’s division’s resolution, which was promulgated on Friday, and released to the media on Monday, January 16.

The special 3rd division is handling Binay’s graft and malversation cases involving alleged irregularities in Makati City’s procurement of hospital beds worth P36.43 million and sterilizers worth P8.83 million for the Ospital ng Makati during her term as mayor.

Binay filed the motion to inhibit in November 2016 after getting an impression “of bias and prejudice” from Tang. It stemmed from an exchange between Tang and Binay’s counsels while the court was hearing the latter’s motion to re-raffle her cases. (READ: No easy ride for Elenita Binay)

The 5th and 4th divisions had just dismissed separate graft cases against Binay when the accused asked the court to re-raffle her other two cases pending before the special 3rd division.

“Because if you are asking the Court to have this case re-raffled, that is practically taking away the cases from the Court and have it re-raffled to other divisions,” Tang said during the hearing.

Asked what their legal grounds were, Binay’s lawyer said “the political color by which these cases have been instituted.”

Tang responded to the “political color” remark by saying, “You are somehow casting aspersions on the impartiality of this Court.”

Binay said Tang appeared to have been offended by the re-raffle request and said in her motion that “the demeanor of the Honorable Presiding Justice affects Accused Binay’s confidence that she will get a fair trial that respects her constitutional rights.”

In denying the motion for inhibition, the special 3rd division said “opinions formed in the course of judicial proceedings do not prove personal bias or prejudice on the part of the judge.”

The resolution added: “Statements and questions of the Presiding Justice do not evince even the slightest tinge of bias and prejudice. They were made simply to clarify matters which the court found nebulous.”

The special 3rd division also junked Binay’s motion to re-raffle. Binay filed the motion because, according to her, raffling off her 4 cases together created an impression that “the acts are connected to one another, or that they arise from similar circumstances and the same acts form a pattern.”

Citing the rules of court, the special 3rd division said that cases may be consolidated if they “involve common questions of fact and law.” Both cases before the division involve procurement irregularities.

In denying the motion, the special 3rd division noted that Binay wanted her cases raffled to a different division simply because she thought that Tang had an “inordinate interest in the litigation of these cases.”

“While Binay appears to be simply asking for the re-raffle of these cases, she, however, adverts to the statement of the Presiding Justice after the raffle of the cases against former Vice President Jejomar Binay,” the resolution said.

The resolution was referring to a news story cited by Binay wherein Cabotaje Tang said she would rule on the cases against Binay “based on evidence.”

“An objective reading go the news story will completely negate the claim of inordinate interest on the part of the Presiding Justice,” the resolution said.

The two other cases against Binay which have been dismissed by other divisions in Sandiganbayan are: graft over the alleged rigged bidding of furniture and office partitions procurement and procurement of alleged overpriced office furniture. – Rappler.com