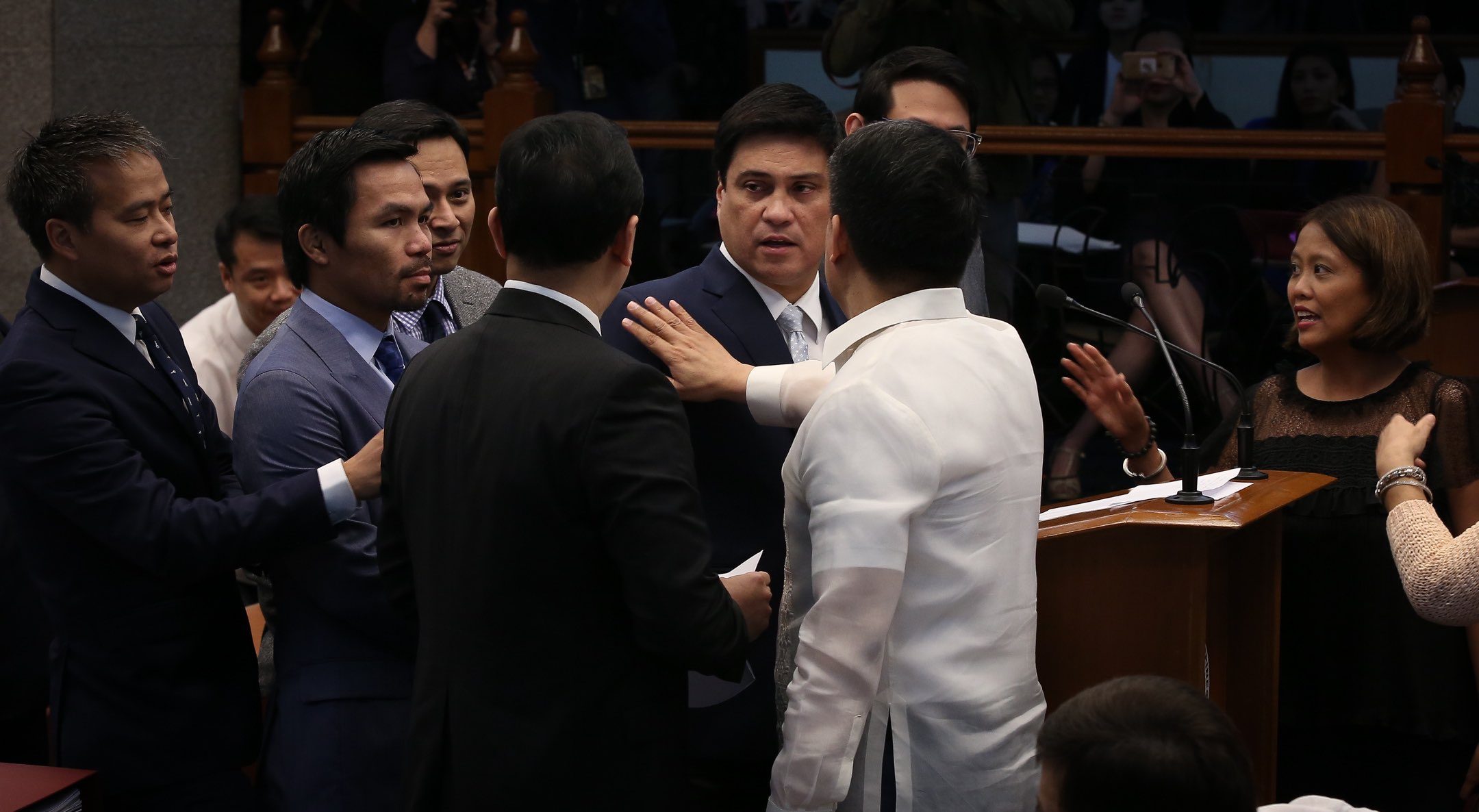 MANILA, Philippines (2nd UPDATE) – Senators Juan Miguel Zubiri and Antonio Trillanes IV got into a heated word war over the planned Bureau of Immigration bribery probe at the Senate Hall on Tuesday, January 17.

It all started when Trillanes, in a televised interview, accused Zubiri and Senator Richard Gordon of “whitewashing” the BI scam probe. This was after the Senate, voting 14-7, stripped Trillanes of the power to probe BI corruption issues, including proposals to reorganize it.

Zubiri, in response, delivered a privilege speech denouncing Trillanes for making the claim. Zubiri said he was merely raising the rules when he proposed that the issue be moved from Trillanes’ committee to the committee on justice chaired by Senator Richard Gordon.

Zubiri also took offense at Trillanes for calling him a “defender of the faith,” in reference to President Rodrigo Duterte.

“Mr President, I take offense that one of our colleagues claims whitewashing. Never in my 9 years as House member, and 4 years as a member of this august chamber have I been accused of stalling or stopping investigation,” Zubiri said in his privilege speech.

In response, Trillanes admitted it was indeed his intention to offend Zubiri.

“If there’s an action, there is a counter reaction. That’s what happened when they blocked the referral to my committee. Therefore they should expect me to react on the matter. And I’m glad that the gentleman took offense because in fact the statement was meant to be offensive,” Trillanes said.

After Zubiri’s claim that he was never accused of whitewashing as a lawmaker, Trillanes immediately raised allegations of Zubiri cheating in the 2007 elections, leading to his resignation in 2011. It was Pimentel who replaced Zubiri, after the former won the electoral protest against the latter.

“If you want to declare war, prepare to have war. This representation will not back down to people like the senator from Bukidnon. That’s it. I believe I have earned that right and no senator should be barred from speaking his mind in front of the media,” Trillanes said.

An agitated Zubiri denied the allegation. He retaliated by bringing up the rebellion issue against Trillanes during the Arroyo administration and by hinting at the ill motives of Trillanes in investigating then Vice President Jejomar Binay and in exposing the alleged billions in secret bank accounts of Duterte.

“I never cheated. I was cheated in behalf of the Team Unity. The gentleman was also accused of rebellion and treason. He was lucky the former president pardoned him,” Zubiri said.

Talking to Pimentel, Zubiri said: “He made an accusation that your party mate, President Duterte, has a P200-million bank account.”

He then appeared to challenge Trillanes to a fight, as he dared Trillanes to say his accusations to Zubiri’s face and not to the media.

“Mabait akong tao (I’m a kind person) and people know me. I’m one of the amiable senators of this chamber but if you pick a fight, I didn’t become world champion in arnis (kali) for nothing. Come out here; don’t say it in the media,” Zubiri challenged his colleague.

Trillanes, appearing to taunt Zubiri, addressed the 3 accusations thrown at him:

Just 3 points. First, Yes, I was accused of rebellion and proud of it; I believe it is one of the shining moments in my life. So it’s a badge of honor.

As to the third accusation that I accused President Duterte of having P200 million in the bank. Well let me correct the gentleman, he had P2 billion in deposits; so that’s a correction. It would be presented later on and in fact, it is one of the attached documents of the plunder case I filed against the President at the Office of the Ombudsman.

Zubiri then motioned that the words “cheater” and “defender of the faith” be stricken off the Senate records, which was seconded by Majority Leader Vicente Sotto III.

By this time, the atmosphere in the Session Hall had become more intense, prompting Pimentel to suspend the session.

The suspension, however, did not stop the two senators from continuing to challenge each other. Zubiri and Trillanes were seen mouthing words to each other face to face, while their colleagues, including Pimentel, tried to separate them. Senator Manny Pacquiao was seen pacifying Trillanes while Senator Cynthia Villar was trying to calm down Zubiri.

Their colleagues eventually brought the two to the Senate lounge to cool off.

After the short break, Trillanes and Zubiri seemed to have regained their composure. Sotto then motioned to remove from record the “unpleasant exchange” between the two senators, which the body approved. – Rappler.com