Pacquiao defends death penalty: Even Jesus was sentenced to death 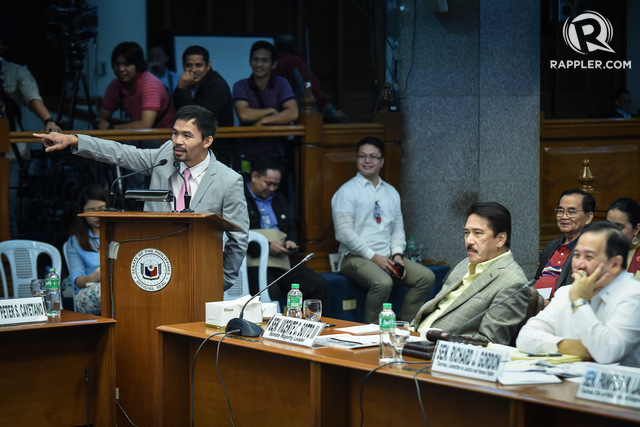 MANILA, Philippines – “Even Jesus Christ was sentenced to death by the government.”

Senator Manny Pacquiao said this on Tuesday, January 17, as he strongly defended the need to reimpose the death penalty for drug cases.

The athlete-turned-pastor said both the Bible and the Constitution allow capital punishment, with the latter specifying only for “compelling reasons involving heinous crimes.”

“Ano ba basis mo to oppose? Because of your religious beliefs or because of the Constitution? Siguro naman the Constitution allows death penalty for heinous crimes,” Pacquiao said in an interview with reporters.

(What is your basis to oppose it? Because of your religious beliefs or because of the Constitution? The Constitution allows the death penalty for heinous crimes.)

(And then with God, biblically, God allows governments to use capital punishment. Even Jesus Christ was sentenced to death because the government imposed the rule then.)

Pacquiao said one is not a good leader if he or she bases his or her decision on “conscience” alone.

“You are not a good leader if you are making decisions with your own conscience. ‘Di ito sa pakiramdam mo eh. Ang titignan mo ‘di pansarili mo kundi sa sambayanan (This is not about what you feel. You should not focus on your own interests but on the Filipino people),” he said.

As for the Bible commandment that prohibits killing people, Pacquiao said the rule only means that an individual cannot take the law into his or her own hands.

“Bible says, ‘Thou shall not kill.’ We are not talking individuals here, meaning kung nagkasala ka sa ‘kin, ‘di puwede ilagay batas sa akin na patayin kita (if you have sinned against me, I am not allowed to take the law into my own hands and kill you),” he said.

In his 1st privilege speech, the senator, citing Bible verses, had said God is for the death penalty.

“Are we greater than God because God is allowing death penalty in every nation and country?” he said in August 2016.

Duterte allies, who dominate the House of Representatives, are confident that the death penalty bill will be passed this year. Opposition congressmen, however, said they could rally at least 50 of their colleagues to speak out against the measure once the debate on the plenary floor begins.

In the Senate, the bill is likely to face an uphill battle, with many senators opposing it. – Rappler.com