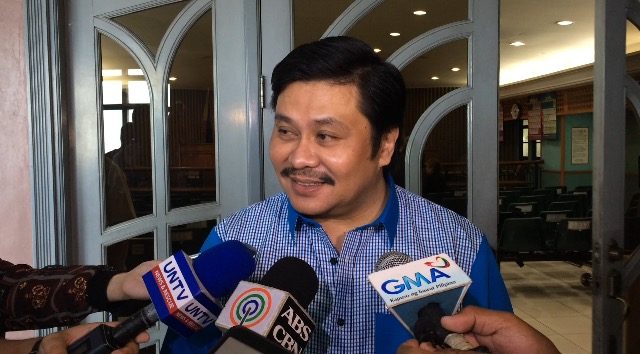 MANILA, Philippines (UPDATED) – The Sandiganbayan has postponed former senator Jinggoy Estrada’s pre-trial for plunder to March 6, as defense lawyers sought the approval of the court to present more evidence.

A smiling Estrada appeared before the Sandiganbayan 5th Division on Monday, January 30, for the scheduled first day of his pre-trial. He is accused of allegedly receiving P183.793 million in kickbacks from his pork barrel, some of which were supposedly personally delivered to his San Juan City home by his father’s former social secretary Ruby Tuason.

Estrada’s lawyers wanted to present documents that would supplement their witnesses. The prosecution contested that plan, however, citing court rules to only proceed with evidence presented during the preliminary conference.

The appeal of the Estrada camp would be subject to “good cause shown,” and the anti-graft court deferred the pre-trial to March 6.

The preliminary conference for the former senator’s 11 counts of graft, meanwhile, was scheduled for February 14.

It is now the defense’s turn to present their evidence. The prosecution rested its case in September 2015 after more than a year of hearings.

(The prosecution is doing nothing but delaying and delaying the case. Those of us detained are the ones suffering.)

Estrada is also asking the Supreme Court to declare as unconstitutional the provision in the Anti-Money Laundering Act that allowed the Anti-Money Laundering Council (AMLC) to investigate his assets without notifying him. The SC, responding to a similar petition by a law firm associated with the Binays, affirmed that provision early this month, but gave parties the option to question the court order to probe into their accounts. (READ: SC affirms constitutionality of AMLC provision to look into bank accounts)

The anti-graft court, meanwhile, has denied Estrada’s motion to reject as evidence the report from the AMLC detailing his and his wife’s assets.

Estrada also told reporters that he might have to undergo surgeries.

“I still experience sharp pain in the right knee, and the doctors suggested I undergo knee operation, knee surgery… and my shoulders, matagal na ito (I’ve been feeling the pain for a long time). They also want to perform surgeries sa (in my) shoulder,” he said.

Estrada underwent MRI and X-ray scans at the Cardinal Santos Medical Center in San Juan City earlier this month after he complained of knee pain. – Rappler.com