Feb 10, 2017 5:24 PM PHT
Carmela Fonbuena
Facebook Twitter Copy URL
Copied
At least 3 MNLF members are now part of the body that will draft a law that will implement a peace deal between the government and Moro Islamic Liberation Front 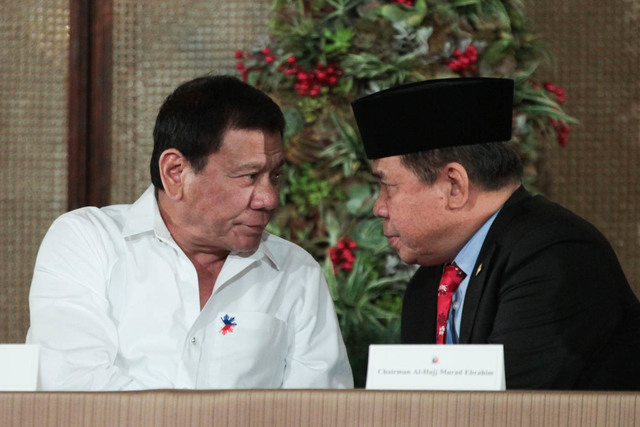 MANILA, Philippines – President Rodrigo Duterte finally signed the appointment papers of the 21 members of the expanded Bangsamoro Transition Commission (BTC) that will draft an “improved version” of the Bangsamoro Basic Law (BBL).

Duterte promised during the presidential campaign that the law will be passed if he won the elections.

“President Rodrigo Roa Duterte has just released the appointment papers of the 21-member Bangsamoro Transition Commission. This will signal the start of the work to come up with an inclusive Bangsamoro law that will truly reflect and address the clamor for a genuine political autonomy for the Bangsamoro people in Mindanao,” said chief presidential peace adviser Secretary Jesus Dureza on Friday, February 10.

It took time to assemble the body.

Here’s the complete list of the new members of the BTC:

The chair of the Government Panel Implementing the Bangsamoro Accords, Irene Santiago, said he expects the BTC to “hit the ground running.”

The government wants the BTC to submit a draft to Congress by July 2017.

The MNLF is now divided into several factions. The government planned to create a separate peace panel to discuss the proposals of MNLF founder Nur Misuari. – Rappler.com