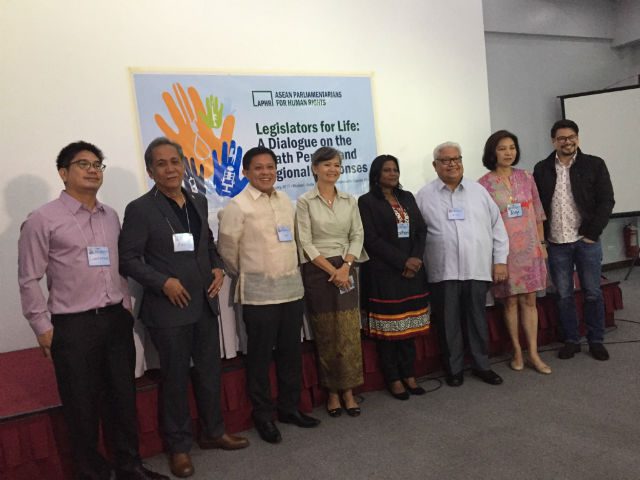 MANILA, Philippine – Several parliamentarians from Cambodia and Malaysia are opposed to reviving the “barbaric, outdated” death penalty in the Philippines, saying doing so would hurt the country’s international credibility.

A total of 9 members of the Cambodian Parliament and 6 from the Malaysian Parliament signed a solidarity statement opposing the planned reimposition of the capital punishment.

Their statement was presented to the media on Wednesday, February 15, at the Microtel by Wyndham Hotel in Quezon City.

“The death penalty is a barbaric and outdated form of punishment and represents the kind of policy our region should be moving away from, not back toward. The bill currently before the House of Representatives puts the Philppines’ international credibility at risk, as well as the stunning progress made in the past decade toward the eradication of capital punishment globally,” said the lawmakers.

The parliamentarians said pushing for the death penalty is “ultimately a recipe for more cruelty and strife.” (READ: Lagman on death penalty bill: Vengeance is not justice)

Capital punishment, they added, will make the poor vulnerable to abuse given the “weak rule of law, partiality, and corruption” of the Philippine criminal justice system.

According to the legislators, reimposing the death penalty will be a “setback” for the Association of Southeast Asian Nations (ASEAN). (READ: An eye for an eye: Can death penalty bring justice to victims?)

“It is clear that reintroducing capital punishment would be a mistake for the Philippines and a setback for our region. As fellow legislators, we strongly urge our counterparts to oppose this bill and keep the death penalty illegal in the Philippines,” they said.

Out of the 10 ASEAN countries, only the Philippines and Cambodia have formally abolished the death penalty. Laos, Myanmar, and Brunei are considered to be “abolitionists in practice” since no executions have taken place in these countries in at least 25 years.

‘Popular is not always right’

Kasthuri Patto, Malaysian parliamentarian, said a nation does not lose face when it seeks to protect the rights of its people. For her, a nation loses its credibility when it listens to a “misinformed public.”

“Perhaps the question is, is defending human rights today unpopular? Will a nation lose face when it does what is right to protect the people and uphold freedom, justice, equality, democracy, and above all, the right to life and human dignity?” asked Patto.

President Rodrigo Duterte won the 2016 polls with a campaign focused on eradicating illegal drugs and criminality. Reviving the death penalty was among his campaign promises.

But for Patto, popular support does not automatically make a particular bill the right one to pursue.

“Just because an issue is popular, it doesn’t make it morally right or effective. The death penalty is neither,” she said.

PH as ‘model’ for human rights

Mu Sochua, member of the Cambodian Parliament, said Cambodia has always looked up to the Philippines as a champion for human rights.

She cited the bloodless 1986 People Power Revolution, which toppled the Marcos dictatorship.

“We in Cambodia always look at the Philippines as [one of the] heroes, the models, the fighters of human rights, respect for human rights. And we have always been inspired by the People Power, by the democracy, by the practice. And we want to continue to put you on that very high position,” said Sochua.

She said the ASEAN needs countries like the Philippines to continue playing this role to protect human rights and to make the regional bloc as strong as the European Union.

“If one nation, one member-state sits back in that fight, you pull back others. And especially in this issue of death penalty, we Cambodians, we are almost certain because of our past, that we will defend our position against the death penalty,” said Sochua.

She explained her colleagues also do not support the death penalty, knowing the “years of atrocities and genocide that killed our people.”

“Therefore, as members of Parliament, representatives of the people, we have to think very seriously about what we are going to vote for or not vote for. We cannot vote for anything according to demand, the order of political parties. We have to serve the spirit of the people,” said Sochua. – Rappler.com