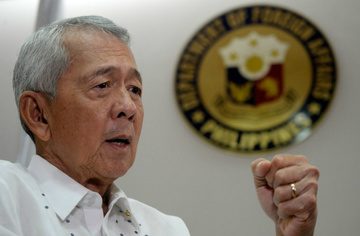 MANILA, Philippines – A member of the Commission on Appointments (CA) said she was “very troubled” by the statements of Foreign Secretary Perfecto Yasay Jr on the South China Sea dispute during his confirmation hearing on Wednesday, February 22.

Responding to questions from CA members, Yasay reiterated the official stand of the Duterte government that the Philippines does not own the disputed area in the South China Sea, even after an arbitral tribunal ruled in the country’s favor against China on the sea row.

“My position, which is the official position, is that the disputed part of [the] South China Sea has never belonged to anyone,” Yasay said in response to questions of CA members on Wednesday.

Yasay said that in not making provocative statements on the dispute that would anger China, he was only being consistent with the position of not causing any tension in the region.

Pressed for the official government stance on the matter, Yasay said the government has never categorically claimed ownership of the disputed islands.

“Even if the tribunal ruled in our favor, this area will continue to belong to international waters,” Yasay said.

Sato told Yasay she was “very troubled” by the Cabinet official’s statements.

His answers before the CA echo the position President Rodrigo Duterte made at his first Cabinet meeting on June 30, 2016.

In the case filed before the artbitral tribunal in The Hague, the Netherlands, during the administration of President Benigno Aquino III, the Philippines presented 5 main points.

1. China has no historic rights over the waters.
2. China’s 9-dash line is invalid.
3. China cannot claim an exclusive economic zone (EEZ) over “rocks” because rocks are not islands that generate an EEZ.
4. China breached the law of the sea when it prevented Filipino fishermen from entering the Philippines’ EEZ.
5. China irreversibly damaged the regional marine environment.

In its decision, the tribunal ruled in favor of the Philippines and added that China should have stopped its construction of artificial islands in the disputed area during the hearing of the case.

Yasay clarified that the Philippines will continue to occupy areas that fall within its EEZ, but that the issue of ownership shall be removed from official statements.

“I do not want to confuse the occupancy to the content of the tribunal decision, that’s completely different. We will make sure that if there is encroachment into our sovereignty, we will assert our rights,” Yasay said.

“I do not believe that the disputed islands case will be resolved soon, maybe even not in this lifetime,” he added.

Senator Panfilo Lacson, who chairs the CA’s commitee on foreign affairs, told reporters that the committee has suspended Yasay’s confirmation hearing because of “concerns” of CA members, mostly from the House contingent. (READ: Yasay to submit ‘proof’ to CA he was never a U.S. citizen)

Lacson said the next hearing has not been scheduled. – Rappler.com