MANILA, Philippines – Later tonight, February 18, UP Fair 2012, entitled “ReboKultura” will come to a resounding conclusion. After 4 nights of concerts with different band lineups, the fair which started February 14, will end with HIMIGsikan featuring the loudest and energetic music numbers the country has to offer.

A mix of mainstream artists, as well as UP Fair favorites will pepper the list of performers. Playing tonight are Parokya ni Edgar, Up Dharma Down, Kamikazee, Franco, Razorback, Urbandub, Chicosci, Giniling Festival, and many more.

To prepare myself for the UP Fair scene this year, I headed out last Thursday to catch the Love Rage 6 concert. I just had to see what I can do to make my Saturday coverage better.

After a couple of hours of getting stuck in the mud, panicking as sudden rain came down on my equipment, and fighting drowsiness as the last band performed at 4 am, I made a list of things to watch out for later tonight. 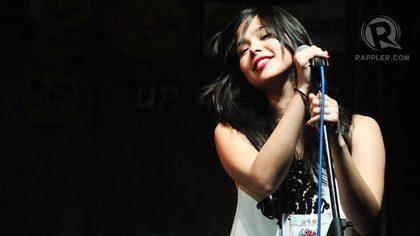 1)    Dress comfortably. No, not jeans, shirt and sneakers. I’m talking pambahay. Slippers, board shorts and… yeah, probably a cool shirt. The recent week has given us gray skies with scattered drizzles, and the Sunken Garden is sinking. Sandals would be better, as there were people who lost slippers in the mud.

2)    Bring a sturdy backpack that contains a bottle of water, snacks, an extra shirt, and an umbrella. These 4 became necessities after 9 hours of standing around, exposed to the elements. Trust me with this one: the water will be key. You can forget everything else, but don’t forget the water.

3)    Have a good afternoon’s rest before heading over to the concert grounds. Trust the concert poster when they say that it’ll run from 6:00 pm to 6:00 am. A nap before the event would be perfect.

4)    Wait for the UP-bred bands. They would say they got their big break after playing at the fair. That’s why they always bring something special when they come back and perform. Hint: When Giniling Festival comes out, get ready to party. What not to do:

1)    Bring valuables. Aside from my camera, I didn’t bring much. UP is a safe place really, but things can get lost with so many people compressed in such a small place.

2)    Mess with security. They’re the ones in orange, near the stage as well as the entrances and exit. This year, it seems they’re pretty strict, and are armed with  arnis sticks. A front row spectator got a bit wild during the Chicosci set and he was immediately reprimanded. Nothing physical, just… a stern talking to.

3)    Drink. What? See, if you want to really enjoy the night/morning, I suggest that you avoid the tipsy stage and just focus on listening to the music. The liquor effect sets in while you’re awake (this was based on an experience before, just wanted to include it), and it’s as sad as it is strange. If you do drink however, just make sure you don’t cause much trouble for others who just came to have a good time. – Rappler.com